Williams (Buller) Stadden - Half back 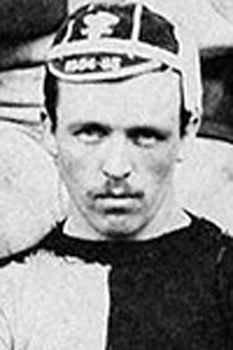 William (Buller) Stadden was born in Cardiff in 1861 and played 68 games for Cardiff between 1882 and 1886, scoring 14 tries. Over a seven-year period he gained eight caps for Wales (his debut being against Ireland in 1884 when he scored with a drop goal) and he is most remembered for scoring the winning try in 1890 to give Wales their first victory over England.
In 1886, Stadden left Cardiff for Dewsbury in West Yorkshire, although the Northern Union (Rugby League) had not at that time left the union ranks many clubs in Lancashire and Yorkshire paid their players for loss of earnings. This was disapproved of by the unions and so was done secretly.
Stadden passed away in Dewsbury in 1906 in tragic circumstances. Cuttings of newspaper reports from 1906 have told the horrific end to the talented rugby player’s life, in what was called ‘The Dewsbury Tragedy’, when he strangled his wife and attempted suicide. The Yorkshire Post reported on Stadden’s arrival at the local police station immediately after the murder he was covered in blood and wounded. It read: “News of the murder of a married woman and the attempted suicide of her husband yesterday cast a gloom over the Christmas-celebrating residents in the Dewsbury district.
“About six o’clock yesterday morning, when Police Constable Hartley was on duty at the headquarters of the force at the Town Hall, Stadden, looking very dejected, walked in. “Joe,” he said. “I have come to give myself up. I have done it.” “Done what?” enquired the officer. In reply, Stadden handed the officer his house key, and pointed in the direction of his home.” Later reporting on the final hours and his death, the Post read: “The only word he has been able to utter since his admission to the infirmary was “Amen,” in answer to prayers offered by the Vicar of Dewsbury, who has attended him.”
The inquest is detailed in a copy of The Reporter, dated January 12, 1906. According to the report, Stadden had kissed his children “Goodbye” and “God bless you,” and blood stains were found afterwards on the bedclothes and on the bedroom doorknobs. The coroner concluded Stadden’s wife had died from asphyxia from strangulation in the form of throttling, and he died of heart failure due to septic poisoning from wounds in his throat.
He is buried in an unmarked grave in Dewsbury Cemetery