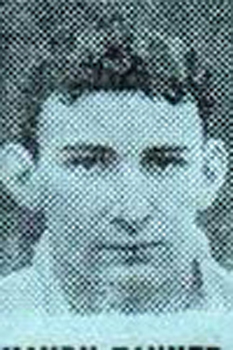 Educated at Gowerton Grammar School and Swansea University, scrum half Haydn Tanner played 73 matches for Cardiff between 1946 and 1949, scoring five tries, having previously played for Penclawdd and Swansea. His international debut came against New Zealand in 1935 - as an 18 year-old - and his last game (his 25th for Wales) was against France in 1949. At the age of 21 he was chosen for the 1938 Lions tour of South Africa and played in the second test. Undoubtedly the Second World War prevented Tanner from winning a greater number of caps. Bleddyn Williams, who played with Tanner, said, "Among all the scrum halves I've seen and played with, he would reign supreme".
Haydn Tanner died in Leicestershire at the age of 82.