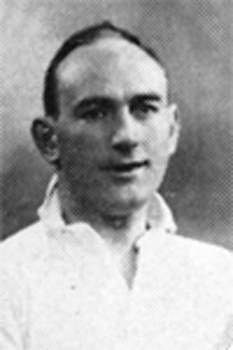 Llandeilo born Donald Tarr began his rugby career as a schoolboy representing the Welsh Secondary Schools and playing for Ammanford. When he left school he joined the Royal Navy and playing rugby for joining Cardiff, playing 23 matches in the 1931 – 32 season and then Swansea from 1933, also playing for the Royal Navy, United Services and the Barbarians.
In 1935 he gained his only Welsh cap playing against the touring All Blacks. Wales won the game 13 – 12 but Tarr’s game had been cut short by an injury so serious that one journalist wrote, "Tarr probably came closer to dying on the pitch than anyone else ever has in an international", Tarr was carried from the field with a dislocated neck, his life had been saved by the referee, who advised the medical team treating Tarr to lay him face down on the stretcher.
Don Tarr passed away in Hampshire in 1980 at the age of 70.