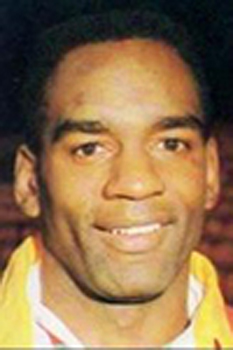 Nigel Walker represented Great Britain and Northern Ireland at the 1984 summer Olympics in the 110m hurdles. When he failed the make the Olympic squad for the 1992 games in Barcelona he was persuaded to try rugby, following a chance meeting with Mark Ring. Deciding to try a new sport he joined Cardiff and soon became a crowd favourite at the Arms Park, also forcing his way into the Welsh side. In a six-year career he played 121 games for Cardiff scoring 78 tries and winning 17 Welsh Caps with 12 tries to his name, as well as appearing for the Barbarians.
One particular game worthy of mention is the 27 – 27 draw against Pontypridd at Sardis Road in May 1996. Nigel scored two tries in the game, both starting deep in Cardiff’s 22 – one even started behind the goal line – and when the team returned to Cardiff Athletic Club after the game he was given a standing ovation by the gathered members.