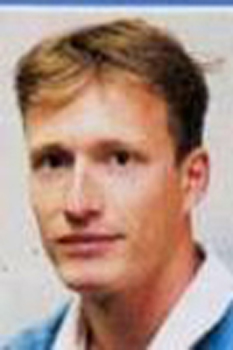 Born in Scunthorpe in 1975, Nick Walne joined Cardiff in the summer of 1999, his association with the club going back to 1996 when he made a guest appearance against the Barbarians before he returned to Cambridge to continue his studies. After completing his studies, during which time he won three 'Blues' he joined Richmond, where he spent a season before a permanent move back to the Arms Park. During his first season at the club he played nineteen times and scored 12 tries, scoring 9 of these in the course of two games. Against Caerphilly on March 11th 2000 he scored a hat trick and in the very next game, against Dunvant a fortnight later, he scored six times. In total Nick played 83 times for Cardiff, scoring 35 tries and an additional 28 games for Cardiff Blues with three tries. Nick represented the Barbarians, Wales ‘A’ and then won three Welsh caps, two 6 Nations games – as replacement v Italy and again against England in 1999 – and against Canada in a World Cup warm up game in August 1999).
At the end of the 2004 – 5 season he retired to concentrate on a career in Banking.