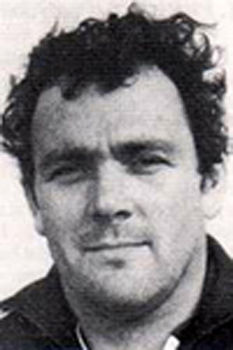 Jeff Whitefoot was born in Bedwas and educated at the local grammar school. His first game for Cardiff was in September 1978 as a 22-year-old and he went on to be one of the most respected props in Welsh and British rugby. In his first full season (1980 - 81), he played in no fewer than 44 of the 48 official first team fixtures to qualify for his club cap. After winning his first cap as a replacement in 1984, he was an automatic choice for Wales playing in 17 consecutive internationals. One great honour that eluded him was selection for the Lions. The signs were that he would have been selected for the 1986 tour to South Africa, but the tour was cancelled. Some consolation was a game for the "British Lions" against the "Rest of the World" as part of the IRB centenary celebrations in the same year. Jeff never forgot his Bedwas roots and his final game for Cardiff was at the Bridge Field in April 1990 a fitting end to a twelve-year career at the Arms Park where he made 305 appearances.