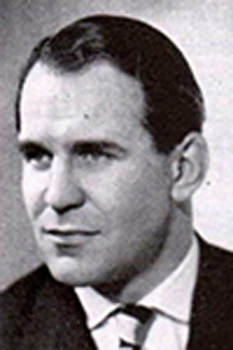 Charles Derek (CD) Williams was born in Cardiff in 1924 and played 248 games for Cardiff between 1945 and 1959 scoring 43 tries. Although a fine back row forward CD only won two international making his debut against France in Colombes 1955 then against the same opposition in Cardiff the following year. CD had won a ‘Blue’ at Oxford and in 1958 played for the Barbarians at Leicester. He was a member of the Rugby Committee 1974 - 75 served for some time as the President of Cardiff Athletic Club.
As well as playing rugby at a high level CD was a fine athlete and the London Olympic games in 1948 had carried the Olympic torch into Wembley Stadium.