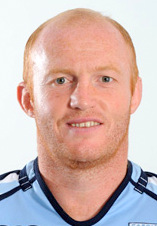 Martyn Elwyn Williams played rugby for Pontypridd, with whom he won the 1996 - 97 Welsh league and moved to Cardiff in 1999 playing 83 games and then playing a further 143 with the Cardiff Blues. In 2002 he was made club captain, a position that he retained through the first three seasons of regional rugby. After gaining international caps at every junior level he won his first Wales cap in 1996 against the Barbarians, and reaching the milestone of 100 international appearances against the same opponents sixteen years. Known to everyone as 'Nugget' he was selected for the British and Irish Lions tours in 2001, 2005 and 2009. His retirement came at the end of the 2011 - 12 season and was awarded the MBE for services to rugby, he also has Honorary Fellowship of Cardiff University which was awarded in 2012.
His 'autobiography' - Martyn Williams, the magnificent seven - contains further details of his life and rugby career.