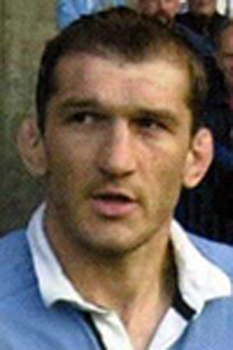 Owain Llewellyn Williams was (and is) one of the greatest characters as well as one of the finest back rowers to grace the club scene in Wales. Born in Ogmore By Sea, Owain played for Glamorgan Wanderers before setting off for Australia, playing for Queensland. In 1988 he returned home to Wales and played for four seasons with his home town team, Bridgend. In 1992 he joined Cardiff, playing ten seasons for the club, and scoring 41 tries in 223 matches as well as kicking three conversions in one match. The 1990s saw some notable successes for the Blue and Blacks and Owain was a central part of these. Cardiff (with Williams in the team) won the Cup in 1994 and 1997, and were Heineken League champions in 1996. The first Heineken European Cup Final against Stade Toulousain also featured Williams as a member of the Cardiff team that came so close to lifting the European crown. His solitary Welsh cap came against Namibia on a tour to Southern Africa in 1990 and he also captained the Welsh 7s side.  Owain retired from the game in 2001.