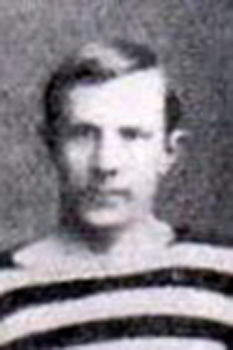 Thomas Williams born in 1860 in Llwynypia and played 53 games for Cardiff then went on to join Pontypridd. Whilst at Pontypridd, he gained his one and only Welsh cap when he was chosen to play against Ireland in 1882. After retiring from the game, he became heavily involved in the Welsh Rugby Union and became a national selector in 1901. In 1891 he was one of the founders of Llwynpia RFC, and was Secretary of the Rhondda, Ferndale and Aberdare league and a Life president of WRU and a qualified referee.
It is reported that Williams was also responsible for leading the singing of the Welsh National anthem before the match against New Zealand in 1905. Many felt that the performing of the Haka by the tourists immediately before the game gave them an unfair advantage and so the players (quickly joined by the crowd) sang ‘Hen wlad fy nhadau’ in response The first time a National anthem had been played at a sporting event. Tom Williams died in Llywnypia in 1913 at the age of 53.