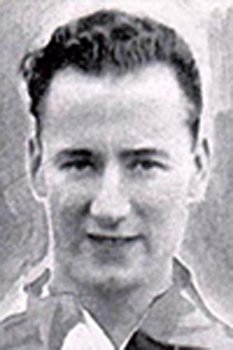 Wilfred Wooller was acclaimed as one of the greatest all-round sportsman that Wales has ever produced, excelling at Cricket, Rugby Union, Cricket Administrator and Journalist. His first rugby was played at Rydal School and played his first international in 1933, whilst still at Rydal school. He won 18 caps for Wales, being a key member of the 1935 Welsh team that beat the New Zealand tourists. In 1935 and 1936 he was a Cambridge "Blue" playing in the Varsity game against Oxford and he had also played for the Barbarians in the 1933 Mobbs Memorial game against East Midlands. When he joined Cardiff in 1936 at the age of 24 a long career was in prospect. Within three years, war had changed that and the best years of Wooller’s career were lost to the conflict, he had played 71 games for Cardiff.
On the cricket field he captained Glamorgan for 14 years, was Secretary for thirty years and President for six. Over the course of 24 years with Glamorgan he scored 13, 593 runs (average 22.57) and took 958 wickets (average 29.96), he also took 412 catches.
While rugby and cricket were the major achievements he also played soccer for Cardiff City and Barry Town, represented Wales at Squash and played bowls for Cardiff Athletic Club
Wilf Wooller died in Cardiff in 1997 at the age of 85.
The book by Andrew Hignall ‘The Skipper: a biography of Wilf Wooller’ contains further information about Wooller’s life and career.