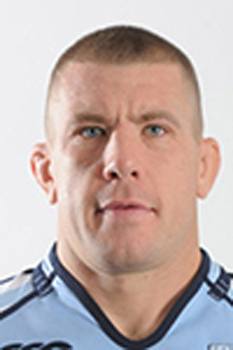 John Yapp was educated at Cowbridge Comprehensive School and he had first team experience with Llantwit Major and Pontypridd before he first played for Cardiff at Christmas 2002, making his first team debut against Ebbw Vale on Boxing Day at the age of 18 years. Despite his age he featured in 17 of a possible 19 games before the end of the season and represented Cardiff Youth and under 21s and played for Wales at U19 level.
His first Welsh cap was as a substitute against England in the 2005 6 Nations, the first of 21 international appearances. Originally a loose head prop he was persuaded by Cardiff coach David Young and Wales coach Warren Gatland to switch to the other side of the scrum and play Tight head. To become familiar with the new role he headed to Australia to play for Tuggeranong Vikings before returning to Cardiff Blues.
After discussions with coach Dai Young and national coach Warren Gatland about the possibility of switching from Loose head to Tight head prop. He headed out to Australia to play to become familiar with his new role in the scrum, before returning to the Cardiff Blues.  In an eleven-year career at the Arms Park Yapp appeared 1888 times for the club (24 games for Cardiff and 164 with Cardiff Blues).
Over his career John Yapp played for London Irish, Wasps, Melrose, Glamorgan Wanderers and Edinburgh as well as appearing for the Barbarians.