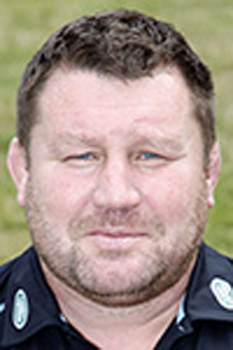 Dai Young was born in Aberdare in 1967 and lived in Penywaun for many years. His early career was spent at Swansea where he played 42 games between 1985 and 1988. It was expected that even though only 19 he would be selected for Wales in the inaugural Rugby World Cup in Australia. Having not been selected he travelled to Australia for the summer to play for Northern Suburbs. Fate took a hand and when Wales suffered injuries in the group stages of the competition Young was on the right side of the world to be called up to the Wales squad and make his debut against England in the Quarter finals, the first of a record 51 Wales caps for a prop. In 1988 he joined Cardiff and played 33 times over the next two seasons, ending his first season at Cardiff with a Lions call up.
At the end of the following season Rugby League came calling and he was signed by Leeds for £150,000 – a record fee at the time and he later played for Salford. When Wales played in the 1995 Rugby League World Cup the captain was Dai Young.
With Rugby Union becoming professional in 1995 the way was clear for Young to return to the Union ranks and he re- signed with Cardiff in 1996, playing another 106 games for the Blue and Blacks before his retirement. In 1997 he was a Lion once again and a similar selection four years later meant that David Young had become the only player to have played for the famous tourists in three separate decades.
On his retirement from playing Dai went into coaching and took over the reins at the Blues before leaving to continue and forge a successful career in the English Premiership at Wasps.