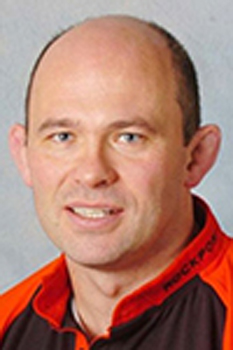 Alun Jonathan Carter, born in Newport 1964, played just once for Cardiff, in 1987 against Glamorgan Wanderers. He played for several clubs including Millau (France), Pontypool, Newport and Pontypridd as well as spending some time playing in New Zealand. He represented Wales Schools (1982 – captain), Welsh Students, Wales ‘B’ (in 1986) and Wales (in 1991 against England and Scotland). He also represented British Police, Combined Services, Monmouthshire and Crawshays (at 7s).
Alun Carter was a member of the back room staff for Wales from 1999 – 2007, went on the 2001 Lions Tour as a technical assistant and also spent time as Team Manager at Worcester, he later went into coaching.
Although a back row forward he played four games for Newport as full back when they toured Canada in 1995