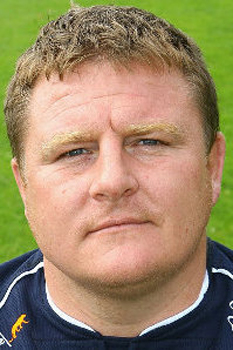 Darren Crompton began his career at Bath in 1993 as a tight head prop. In 1999 after a spell with Richmond he moved to Bristol. He played for Bristol for four years before moving to Cardiff Blues in 2003 - 04 and then returning to Bristol for a second stint from the Blues. Whilst at the Arms Park he made three appearances for the Blue and Blacks.
Darren played for England U16s, captained the U18s and U21s and was selected for the England "A" tour of Australia and Fiji in 1995.In 1998 he went on his first full England tour to the southern hemisphere but returned uncapped. He won his first cap as a replacement during the first test against Springboks in Bloemfontein at the age of 34.