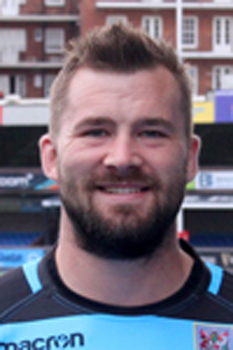 A dynamic back-row forward, Newport born Morgan Allen came through the academy at the Dragons, playing for them at U16, U18 and U20 levels – during which time he was also selected for the Welsh U18 and U20s teams. Whilst with the Gwent region he also played for Bedwas, Pontypool, Ebbw Vale and Cwmbran. Periods with the Ospreys (and club appearances for Swansea and Aberavon) and Scarlets (where he also played for Llanelli and Carmarthen Quins) followed before signing for Cardiff for the 2018-19 season. His first league appearance for the Blue and Blacks came in the opening game of the season against reigning champions Merthyr and his first season at the Arms Park saw him make 30 appearances and score 15 tries – the season ending with a cup win and second place in the league.