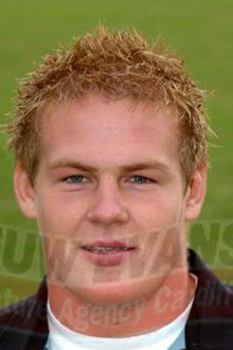 Iorwerth Alan Rhys Gill born October 1986 in the Rhondda played for Glamorgan Wanderers and Cardiff.
A former member of the Cardiff Blues Academy, Gill represented Wales at U16 and U18 levels, before signing for Cardiff as an 18 year old. He made his Cardiff debut in 2005 and went on to become a member of the Welsh U20 squad that season. In his first season he made 18 appearances for the Blue and Blacks and also made his league debut for the Cardiff Blues against Munster at Thomond Park in May 2006.
The loose-head was signed by English Premiership side Saracens in 2009 and his development was rewarded with a place in Wales senior squad for the 2010 Six Nations Championship making his debut as a second half replacement against Ireland. After a successful spell with Saracens (including three championship medals and a European Champions Cup medal) he returned to the Arms Park in 2016.