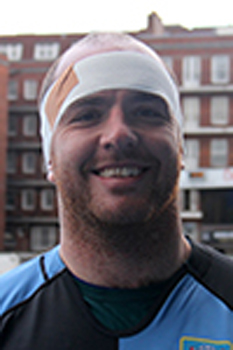 Lou Reed was born in Treorchy in 1987 and played for Rhondda Schools before joining the Pontypridd academy and playing for the Celtic Warriors. When the Warriors folded he joined the Llanelli Scarlets. In December 2007 he was sent out on a month’s loan in to Rotherham to gain some first team experience, returning to the Llanelli based region where he stayed until 2012 when he signed for Cardiff Blues also making three appearances for the Blue and Blacks. Leicester signed him on loan in 2014, a move which was followed by a spell with Sale Sharks before returning to South Wales to play for Merthyr. Reed won five Welsh caps, making his debut against Scotland as a second half replacement in 2012.