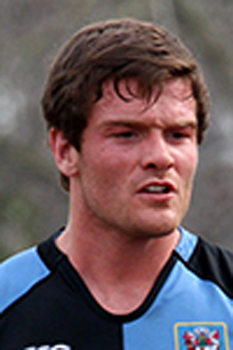 Tavis Knoyle was born in Pontneddfechan, Vale of Neath, in 1990 and started his Youth rugby career at his hometown club of Glyneath. He went on to play for Neath, Llanelli, Gloucester and joined Cardiff Blues in 2014. Knoyle played for Pontypridd as well as playing seven games for the Blue and Blacks. At the end of the 2015 – 6 season he left the Cardiff Blues and joined the Newport Gwent Dragons.
Tavis represented Wales at age grade levels, U16 and U18, and gained four caps at U20s. In 2010 he was named in the Wales Squad to tour New Zealand making his debut against the All Blacks in Dunedin. He made his Welsh Six Nations debut at Murrayfield against Scotland in 2011 as a second half replacement for Mike Phillips.