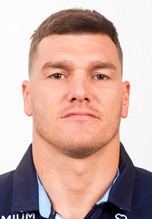 Tom James born 1987 in Rhymney. Tom was an athlete before turning to rugby whilst older brother, Robbie, was a professional Boxer. After turning to rugby Tom joined Merthyr playing on the wing and joining Cardiff at the start of 2006 - 07 season. At the start of the season Tom scored 11 tries in just nine games, performances that brought him to the attention of the Cardiff Blues.
In the 2006 season he also joined the Welsh Sevens squad, playing a number of games. At the end of the season he was called up to the Welsh national squad for the summer tour of Australia although he didn't play a game on tour. Although he won 12 caps for Wales he fell out of favour when he was selected for a short tour to South Africa. During the tour he criticised the Welsh management for not picking him in any of the three games and complaining, quite fairly, that it was a long way to travel if they were not going to select him, they clearly knew that before leaving Cardiff and it would have been better for him to relax during the summer rather than being dragged half way around the world for nothing.
Tom left Cardiff Blues to spend a few seasons playing for Exeter Chiefs in the English Premiership before returning to the Arms Park. At the end of the 2018-19 season he left the Arms Park, signing for Welsh Premiership side Merthyr.