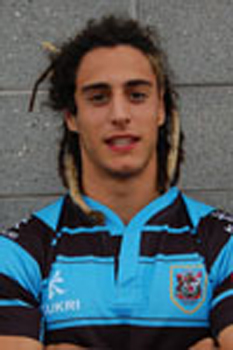 Josh Navidi, the son of Bridgend businessman Hedy Navidi, was born in Bridgend and attended Brynteg Comprehensive School. A member of the Cardiff Blues Academy, he played for Glamorgan Wanderers and Cardiff before making his Cardiff Blues debut against Leinster in Dublin in 2009. After captaining the Wales U20s he won his first full Wales cap on the summer tour to Japan in 2013 but had to wait four years before regaining his place in the national team. Josh’s size belied his great skill and immense strength, meaning that those who preferred bigger players often overlooked his great ability. He was, however, a crowd favourite at The Arms Park and was often the recipient of ‘Man of the Match’ and ‘Player of the Season’ awards.