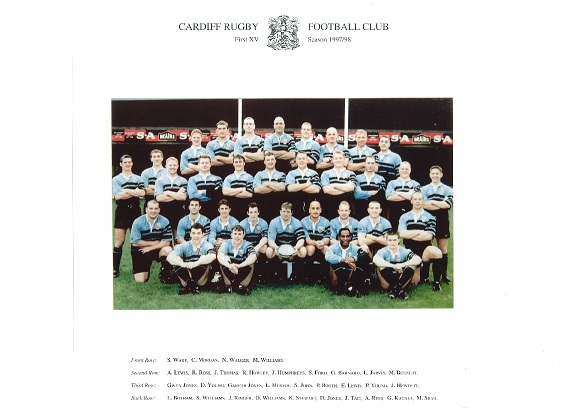 This year our squad of players was strengthened by the arrival of the following players: Greg Kacala, Tony Rees, Steve Williams, John Tait, Bob Ross, Spencer John, Steve Wake, Gareth Thomas, Liam Botham, and Paul Williams. Despite tremendous commitment and effort by players, coaches, and administrators we were not rewarded with any silverware, although there were many pleasing results along the way.

Unfortunately, this season will be remembered for Gwyn Jones’s injury on 13th. December against Swansea. It was delightful to see Gwyn as a spectator at our last game of the season against Llanelli. We all wish him the best as his progress continues. This last game also saw Hemi Taylor returning from a prolonged back injury to play an outstanding part to secure victory on that day. We also wish Nigel Walker, Craig Morgan and Gareth Thomas a speedy recovery.

Playing teams on a home and away basis gave the European Cup Competition greater credibility and we managed to reach the quarter final stage where we lost narrowly to the eventual winners Bath by 32pts – 21 pts. One of the highlights of the season was our exciting win at Harlequins 31 pts – 32pts with tries scored by Robert Howley, Phil Booth and Steve Williams. This game demonstrates the strength of Cardiff’s followers, making their presence felt with wonderful vocal support.

Reaching the final of the Challenge Trophy was particularly pleasing but Pontypridd gained the home advantage with the toss of a coin. This was a significant factor and eventually we lost 15pts – 10pts.

Our progress in the SWALEC Cup competition ended at Ebbw Vale on 28th February losing 24pts – 9pts in the sixth round after convincingly beating them in the league the previous Saturday 38pts.- 18pts. This reversal typified our inconsistent form throughout the Season.

Our fragmented fixture list and the Five Nations Championship matches saw our supporters with only one meaningful game between Saturday 31st January and Saturday 18th April at the Arms Park. This situation must not be allowed to continue if the club is to retain its faithful band of supporters and be commercially viable

Our disputes with the WRU have been ongoing throughout the season and have placed added pressure on all concerned. I hope that these will end in a satisfactory conclusion very soon. I would like to thank Alex Evans, Terry Holmes, Anthony Faulkner, Geraint John and Brian Lease for their loyalty, hard work and magnificent contribution to the team throughout the season and congratulate them on their achievements. Likewise, Howard Stone, Les Goode, David Williams and Andy Moore for their work with the Youth and Junior Cardiff Teams.

Our Captain Jonathan Humphreys has led the team with pride and honour both on and off the field while his own performance has been truly outstanding. Well done!

Lee Jarvis once again excelled by beating his own record of 408 points with this season’s total of 492 points. The record number of tries scored was topped with a new total of 219 tries this season. Also the total number of points scored (1623) is a new record, which is amazing considering the number of matches played. Well done!

We wish Robert Howley and Leigh Davies a successful and enjoyable tour to South Africa.

Congratulations are extended to our Youth XV for reaching the final of the Welsh Cup Competition which was won by Newport and for achieving a very successful season.