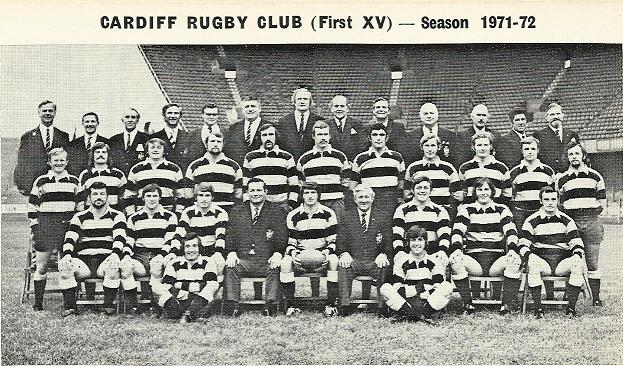 Excluding the W.R.U. Challenge Cup matches and those of the Rhodesian Tour the season’s results were: P43, W30, L13, DO, with points 764 to 435. The try value was increased from three to four points. It was an extraordinary season for the club, in many ways comparable with some of the glorious ones of the past. Its players, not least the more successful ones, might well reflect on the privilege of playing for such a great club and to share in its honours. Our captain was John H. James, a native of Laugharne, Pembs., who had captained Llandovery College and played three times for Cambridge University against Oxford. A splendidly built flank forward of over six feet in height, John joined Cardiff in 1967—68, gaining an Athletic XV cap for 1969—70. Of farming stock, he had qualified as a veterinary surgeon and to his great distress, and before the season had started, he injured his thumb and hand by injection of anti-abortion serum. As a result, he was unable to play until late in the season, taking part in only seven games, including, as delayed compensation as it were, all five matches of the Rhodesian tour. Alec Finlayson (vice-captain) took over the captaincy, and even he was injured with a back injury against Newport in February, and Roger Beard our grand prop forward was called upon mostly to deputise for him.

Ian Robinson “Robbo”, was injured in the first match of the season and was out of action for eleven games. In the programme notes for our match on 9th October with Northampton, Dai Hayward wrote, “We have more walking wounded than Napoleon on his retreat from Moscow.” But the chief injured sufferer was Lyn Baxter, who, in the final Welsh Trial match of 1st January, dislocated his elbow in the act of putting the ball over the line for a try. He was going ‘great guns’ at the time and lost an almost certain Welsh cap which all the experts predicted. Roger Lane and Wayne Lewis who was also hurt in the trial, with our three British Lions made up Cardiff’s representation. Added to this injury factor, and the absence of John Bevan, Barry John and Gareth Edwards until late in the season, it was no wonder that we had suffered four defeats by 1st October, to Coventry, Pontypool, Abertillery and Newport.

We lost twice to Bridgend, on the second occasion in the last minute after having been the better team for nearly all the game without scoring; we lost to Newport and the French team Provence d’Auvergne in succession, Lianelli and London Welsh on the international match morning. The Heriots Club of Scotland beat us under floodlights before the Wales-Scotland encounter—next day some of our goal kicking was very poor indeed. Bristol beat us under floodlights at home by 15 points to 12, they were the better team on the evening. Bristol’s great second row forward, David Watt, of Welsh extraction, celebrated the match with his record of 395 appearances for Bristol.

One of our best victories was that over Ebbw Vale at home, by 26 points to six with quite a weak team. Wayne Lewis the former Llandybie, MilIfield and Swansea wing distinguished himself with two tries after some great running and anticipation. We beat Cambridge University at home 17-4 and Brian Rees, former Cambridge hooker who had joined the club, was in opposition to his brother G. Rees who was propping for the Cantabs. On 4th December two of our Lions returned to the team and played against Swansea, Barry John and John Bevan, and they provided the necessary attacking spark; the whole team raised its standard and the Cardiff crowd witnessed some sparkling Rugby. Swansea were beaten by 38—6, a resounding victory for Cardiff. The following Saturday we had the help of Gareth Edwards in our match against the Harlequins at Twickenham. Gareth’s brother Gethin partnered him at half-back on a number of occasions, both took part in the Rhodesian tour in May. Another win—by 22 points to 15—at home over Coventry greatly pleased our supporters, “back to its former glory” some said. Our pack outplayed Coventry’s always strong eight, with P. Rossborough, Peter Preece, G. W. Evans, R. E. Webb, D. Nicholls and W. G. Gittings, and the great David Duckham behind them. Barry John kicked five goals and scored a try.

John Bevan, Gareth Edwards and Barry John were now showing their worth to the club. Under the Lions’ captaincy of John Dawes they had covered themselves with glory in New Zealand and Australia and had played leading roles in the success of the Lions in the test series with the All Blacks. In New Zealand alone Barry John amassed a total of 180 points, and he, together with Gareth Edwards as scrum half were rated as the world’s greatest pair of half-backs; Barry was acclaimed “King John”. The powerful running of John Bevan produced 17 tries and made him top scorer. All three received unanimous praise of the Rugby world, much so in Wales and through the television media. They were given a ‘Welcome Home’ night by the Rugby Club, with vocal support from the C.A.C. Male Voice Choir. Barry John “donated” his record breaking, kicking boots, to the club museum, and Gareth his British Lions jersey. It was with much regret from his club point of view, and that of all his Rugby fans, that Barry John decided to retire after the end of the season to take up a commercial career with television and writing. He retired at the pinnacle of his Rugby fame, and with Bevan and Gareth Edwards had shared in a British Lions success, the Triple Crown and the Grand Slam for Wales within the space of his last twelve months of Rugby.

One of our great victories was that over the mighty Barbarians on 1st April by 43 points to ten, against a powerful combination of no less than fourteen internationals including Pierre Villeprieux France’s international full-back, who kicked two goals. After a brilliant break and scoring a try John Regan was injured, and left the field after thirteen minutes’ play. Yet Cardiff played with sustained brilliance and achieved one of the greatest successes in its long history. Barry John’s boot kicked seven goals.

Prior to the club embarking on a tour to Rhodesia there had been a few public protests at Cardiff’s acceptance of the invitation, because of the existence of Rhodesia’s unilateral declaration of independence. But having been given the go-ahead authority of the WeIsh Rugby Union, and in the sporting interest of Rugby football, the tour, with its very interesting itinerary, was carried out, and turned out to be a very successful one. All five matches were won, including the test with Rhodesia itself at Salisbury, where Mr. lan Smith the Prime Minister was present to see a Cardiff victory by 24 points to six. The Rhodesians were delighted with the display of some great Rugby by Cardiff. Records were broken, Mashonaland were beaten by the highest score in the clubs First XV history, 74 points to 3; Mervyn John scored a try in each of the five matches, seven in all and was top scorer, exceeding the four of Gareth Edwards, Roger Lane and Neil Williams. Our young army full-back John Davies kicked sixteen goals and notched a try.

In Cardiff’s W.R.U. Challenge Cup matches, we were nearly beaten by Cardiff Training College who produced a very fit, robust, fast moving fifteen who played Rugby football as became a well coached student unit, Cardiff just won by 7 points to 6. In the semifinal played at Bridgend, Neath, the better side on the day, beat us 16 points to nine and they went on to beat Llanelli in the final on the national ground at Cardiff Arms Park. In ‘sevens’ we won the Welsh (Snelling) Tournament, beating Pontypridd, Maesteg, Neath and in the final Bridgend by 15 points to four.

The Athletic XV record was P37, W31, L6. Points 898—338. John Uzzell was captain, he was a strong determined centre who tackled hard, and was versatile. He joined the club from Newport in 1967—68 and already possessed five Welsh caps; it was his dropped goal which defeated the 1963—64 All Blacks, their only defeat, and it brought a unique honour to himself and Newport, who thus joined Cardiff and Swansea the only clubs who had triumphed over New Zealand, until Llanelli did so in 1972. John was a most loyal player, who, before he retired in 1973—74 had played 54 games for the 1st XV, gaining his cap, and no less than 117 for “The Rags”. It was an excellent season. By the end of March 843 points had been scored, and the captain’s ambition was to score 1,000 points, but it was not to be, and rather unaccountably The Rags fell off somewhat in April scoring only 55 points instead of 102 required in the last four matches.

Six clubs were beaten by 40 points or more, namely Llantwit Major 52—6, Porthcawl 40—6, Llanelli Wanderers twice, 52—6 and 66—3, Wasps Vandals 54—15, Newport Saracens
42—4, and Penygraig 56—6. Stuart Watkins scored 14 tries, Martin Pengilley 10 besides kicking 40 goals, P. Lyn Jones and Peter Flood 10 each, the captain scored seven tries and two dropped goals, Neil Collins and Elwyn Williams each got seven tries, John over the line for a try. He was going ‘ great guns’ at the time and lost an almost certain Welsh cap which all the experts predicted. Roger Lane and Wayne Lewis who was also hurt in the trial, with our three British Lions made up Cardiff’s representation. Added to his injury factor, and the absence of John Bevan, Barry John and Gareth Edwards until ate in the season, it was no wonder that we had suffered four defeats by 1st October, to Coventry, Pontypool, Abertillery and Newport.