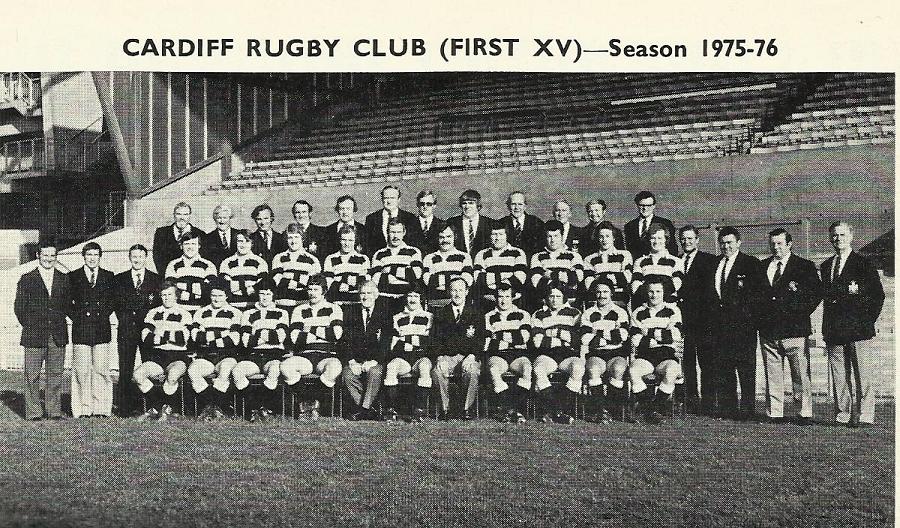 The season really began on Easter Sunday 1975 when, at a meeting of the players and Committee, a scheme agreed upon by Keith Rowlands was unanimously agreed upon that the Captain of the Club should be nominated as a result of a proposal by Committee and seconded by a player or vice-versa.

The Club Captain immediately called for a day long seminar at which approximately 50 players were in attendance. The two new coaches, John Evans and Chris Padfield were introduced to the players, and also at this event Gerald took the opportunity o indicating to all present his targets for the approaching season.

In order of priority these were

3. To win the WRU Knockout Cup

This kind took me back to the days immediately after the War when under Dr Jack Matthews, Haydan Tanner and Bleddyn Williams; the Cardiff team did exactly what Gerald was preaching to the players. I was delighted that my term as Chairman was to start in such a manner.

The month of September was significant for several reasons and the main one was the departure of the Wales team for Japan. As a result we were without the services of Gerald Davies and Gareth Edwards for the whole month. The Committee also had to do without Les Spence who managed the tour so successfully.

Reports subsequent to the tour have indicated what a marvellous job the great character of Cardiff and Welsh Rugby did in Japan, a country which he had much reason to remember from the past. Well done Les Spence.

There were eight matches in September, three of which were lost. With Roger Lane acting as Captain the team did remarkably well, losing to Moseley by one point and to Coventry by three points after leading in both matches until the end.

The Gala match was played in a torrential downpour, and in normal circumstances the game would have been cancelled, but with Cardiff having travelled hundreds of mile and Gala celebrating their centenary it was felt the game should go on and the huge crown were not let down.

There were great wins against Bridgend (away) and Blackheath and Bristol at home.

Also during the month the team played at the ground of Cardiff H.S.O.B on the opening of their new clubhouse. The ceremony was performed by Cardiff’s oldest living international: Me Ewan Davies, who warmly congratulated the Old Boys Committee on having the foresight to include two squash courts inside the building.

October proved to be a month of mixed fortunes. Another eight games were played, starting with Penarth who gave Cardiff a terrific game and were actually leading with 15 minutes to go. Lyn Baxters team almost took the honours with a great exhibition.

The first game against Newport (away) proved to be a bitter disappointment for our supporters as the team gave a lethargic display. It was Gerald’s first game and he was off the filed for most of the game with double vision.

Then a different story at Pontypool when a good first half was almost countered by ‘Pool’ in the second half.

Northampton at home was a repeat of the mixture as in the space on ten minutes Cardiff were 12 points down. The skipper then assumed the role of goal kicker and turned the game in our favour. Back again to normal at Ebbw Vale where nothing went right and we were well beaten in the end.

At home to Cambridge, Cardiff were again troubled by a certain amount of indifference and Cambridge actually score more tries than we did, but again Gerald’s kicking was tremendous and pulled us through. At Pontypridd, in front of their best crowd of the season, Cardiff were brilliant and on this occasion Gareth Edwards had one of his best games of the season. The month ended with another terrible exhibition at Twickenham against Harlequins.

The game was watched by the newly arrived Australian touring party and a few hundred Welsh exiles who regularly follow Cardiff when they are in the Metropolis.

It was impossible to explain to those people why Cardiff could be so brilliant at times and so terrible at other times. The Australians must have had much food for thought after the game.

At least 30 players had played in the 17 games to the end of October in an effort to find the best possible combination and this to a certain extent was responsible for the variance in our game.

The game against Australia is now part of the Club history and in spite of the drama of Gareth Edward’s withdrawal through flu the team raised their game and spirits to magnificent heights to the delight of our own supporters and Rugby followers throughout Wales.

To be Chairman of Cardiff is indeed a great honour, to be Chairman when the club beats a touring side is a bonus few chairman enjoy. When the Australians returned home Cardiff were the only Club side to have beaten them during their tour and much of the credit must go to the youngsters in the side and the skipper who’s per match talk was such a great source of inspiration.

The team was now full of confidence and went on to beat Newport with great expertise and relieved me of a Chairman’s greatest nightmare (that of being beaten four times in a season by the Black & Ambers for the first time in the long history of both clubs). Newport were to come close to this as they subsequently beat us in the remaining matches to win three out of four. This year is also historic inasmuch as the two clubs have decided that in future there will be two matches per season.

Thus Cardiff entered a period of tremendous success as only one match was lost from October 25th to January 31st, that against Llanelli (away) and the Club won 14 matches and two Cup matches during this period.

The Rugby played was superb, and one away game in particular deserves mention, that against Coventry. The Club were honoured by American ambassador to Great Britain and his family. They enjoyed their short stay in Cardiff and were able to see a fine game played between an English and Welsh side.

Mr Elliot Richardson was recalled to the United States to become Secretary of State for Commerce, but his stay was long enough to appreciate the atmosphere of the Cardiff Club. “The singing was superb”. Mr Richardson’s successor Mrs Anne Armstrong has also been a visitor to the Club premises.

The Club were delighted once again to have Gareth and Gerald representing us at Twickenham and with Gareth Davies as a reserve half back, Brynmor Williams as reserve scrum half, Mike Knill as reserve forward for Wales and Barry Nelmes reserve for England we couldn’t grumble. Gareth Edwards went on to win his 45th cap and break the Welsh record held by Ken Jones. Mike Knill was awarded his Welsh cap when substituting in the game against France. Mike and Brynmour Williams are also in the Barbarians party to tour Canada.

Our elimination from the Welsh Cup was a great blow especially as the game was lost in the last few minutes after Cardiff had played all the rugby on the day. The team recovered somewhat by beating Gala convincingly at home and Bristol away, but were unaccountably losing to Bath (away) by a penalty kick. Cardiff were due to play Llanelli on this date but they were playing in the cup. Llanelli found it impossible to find a date to play at Cardiff and so we were denied the opportunity of playing them on the Arms Park.

March saw the Club losing twice to Newport but in between these matches beat Italian selection side in L’Aquilla and also in Rome. We were happy to renew our friendship with Roy Bish and his good wife and also Roger Beard who appears to be doing well in Brescia.

The Italian trip could be described as an experience in more ways that one, but we were relieved when the Youth team arrived back having travelled almost the length of Italy.

The season finished on a high note with the magnificent win against the Barbarians where once again Gareth Edwards and Gerald Davies did the trick. To recover from 24-0 down was indeed an achievement.

Finally the Sevens Tournament which could well be called the Royal Sevens in future. The Prince of Wales not only honoured us with his presence but also presented the Cup to Cardiff after a fantastically successful tournament. Gerald Davies again surpassed himself with great runs and wonderfully accurate gaol kicking and with Chris Camelleri winning the Everson award one could not have selected a better end to the season.

Looking back it was a season of variances, on one hand brilliant exhilarating rugby and on the other hand devastatingly lethargic performances. Many questions will be asked by the critics, one of which could be “What would have happened if Gerald had done all the goal kicking?” Nethertheless much credit is due to Gerald and the selectors for sticking to their tasks in spite of adverse and sometimes unfair criticism.

It would be opportune to remind everybody once again that the only incentive offered to Cardiff players is the honour of playing for the club, and this is how it will remain until the rules are changed.

It was another great season for John Hickey and his Rags marred only by the fact that John suffered a broken leg and did not take any further part on the field. His value as a loyal Club man is tremendous and his contribution as a Committee man is always appreciated.

One again the Youth side have had a very successful season under Peter Goodfellow and in particular did very well in Italy where the interpretation of the word youth leave much to be desired. The side contains many great prospects and the future of Rugby in Cardiff is almost assured by the lads produced by the Youth.

Alan Phillips “the poacher” our popular hooker broke the try scoring record for forwards with 19 tries beating the existing record of Mervyn John and Roger Lane. Gareth Davies scored the Club record of points – 230. Congratulations to both. Late in the season Gerald Davies showed how competent a goal kicker he is – 15 or 7 a side matches. The new caps were C Camelleri, R D Jones, P Rawlins, D Thomas and T Worgan

The Welsh National Sevens Tournament saw Cardiff triumph even without the services of Gerald Davies for whom Peter Bolland deputised to link with the other players who had won the Snelling event. In the final (we had beaten on the way Cross Keys 16-6, Maesteg 16-4 and Pyle 24-4) we met Bridgendand beat them for the second time in succession (28-27) and the Tournament itself. Our young sevens team deserves much praise for their fine play in the Snelling and Welsh National Tournaments. For the statistics, Cardiff and Bridgend have been finalists in the Nation event for the past five years, and Cardiff’s latest success gives them three victories to Bridgend’s two.

Player of the Year – Danny Wilson.