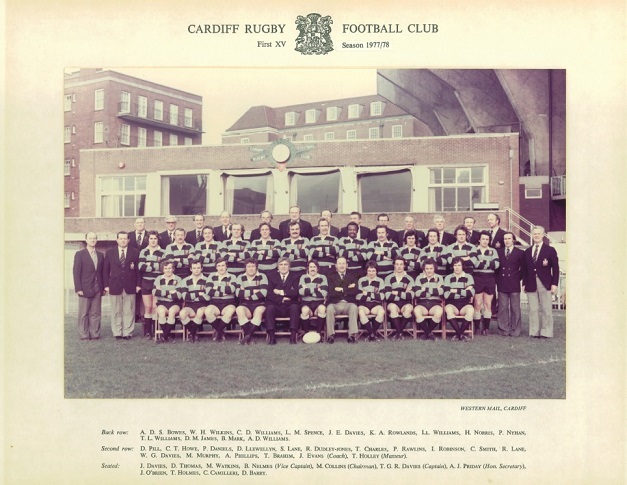 In June 1977 occurred one of the greatest moments of my life. I was elected chairman of the greatest rugby club in the world. This was for me and even higher accolade than having been make Cardiff captain in the season 1955/56 and also regarded it as a tremendous challenge following our successful centenary. With reliance on the guidance and assistance of the honorary secretary Mr Allen Friday and minor administrative responsibilities were soon sufficiently organised. In retrospect it would appear that the club’s victory in August 1977 in the Aberavon sevens over the select ‘inn on the river’ side. An encouraging start the season was made in September were notable victories over Maesteg, Neath, Glamorgan, Wanderers, Aberavon, Coventry and Pontypool. The latter two victories were particularly gratifying hard earned as they were.

Those wins gave us confidence going into the first game against the old enemy Newport who had made an auspicious start of the season. We were very self-confidence and cocksure during the game but this was destroyed by an efficient Newport team, losing 27-10. In the next game against Pontypridd again we were outplayed and lost 24-11. I well remember touch judge Peter Nyham’s flag raised standing like a Welsh Guardsman signalling the Cardiff foot in touch in the first half was a vital. Cardiff scored under the Pontypridd posts only to be brought back to the first infringement.  Both teams were playing well at this juncture but the sense of despondency and alarm appeared in the Cardiff.

Gerald Davies’ positive assertion that these were temporary setbacks and that the team would recover its playing style of entertaining enjoyable XV man rugby which they did straight away as witnessed in the wins over Northampton, Penarth, Cambridge University and Harlequins. The next game against an unbeaten Moseley side away was lost in exciting tussle 18-9 owing mainly to Moseley’s defence and placekicking.

November arrived with good wins against Oxford University and Ebbw Vale. The commencement of the WRU Cup began with a first-round draw against Gardiffaith away. The proud Gwent club perched on a windswept hill just north of Pontypool. An exciting game was witnessed with the Garn team tackling and chasing their hearts out like heroes and Cardiff were lucky to win by three penalty kicks to nil.

At Llanelli where we had not won in nine years our positive attacking would be produced a convincing win for Cardiff by 22 points to 10 which personally eradicated memories of my losses at Stradey in season 1974 when we lost 37-10.

Early December saw good win against Swansea mainly ensured by lady luck and the bounce of a ball. Next up for us was the game against renowned Pontypool on a cold rainy windy night. A large partisan Wednesday night crowd a superb 80 minutes of forward power and a thrilling late rally by Cardiff thereby ensuring an honourable draw. The London Welsh game was a personal triumph for Pat Daniels who amassed a tally of five tries in outstanding game.

In the cup the second WRU Game was played at the Arms Park against Cwmavon who although they played enthusiastically could not match’s speed power and skill. We won 27-6. We also won 18-6 against Bridgend on the Brewery Field despite a second-half onslaught by the Bridgend pack. It was good to have a tactical control of Varsity blue Gareth Davies back in harness after two months Oxford University.

At the Arms Park on Boxing Day Pontypridd achieved a notable double against us in a well-deserved 13-9 victory. The end of 1977 saw tremendous struggle against Coventry when having built up a commanding lead Coventry almost overhauled us in the nail-biting finish we ended up victors 24-22. So ended 1977 with a long run of victories. 4 losses and one drawn game but could we sustain club and cup performances into 1978.

The New Year began in superb fashion with a game against London Scottish in which both sides excelled in open play and counter-attack producing in the end a win 31-21 Bedford scalp fell us next in the unrelenting dour game. Then came WRU Cup and a visit to Pontypool Park. Our chances of success almost against the famed Pontypool eight was naturally advertised as minimal. As predicted Pontypool dominated the game up front but Cardiff’s rocklike defence held firm and Gerald Davies capitalised on four good movements to score four magnificent tries in so doing emulating his Lions Hawke’s Bay performance to steal the game for 16-11.

February brought heavy frost ice and bad ground conditions causing us to cancel the games against Bristol and Heriot’s FP but inclement weather did not stop us inflicting defeats in London Welsh and Llanelli. In the WRU cup third round game we had been drawn away in Gwent and found ourselves 12-3 down at the interval. But following a stern half-time lecture Cardiff became a decisive attacking machine to win the game 29-10.

March arrived and rearranged game against Newport was won 12-3 although the Black and Amber’s had the greater share of possession. The game against Bridgend on the Arms Park followed now familiar pattern and again we narrowly lost 7-6, a game in which JPR Williams was undoubtedly be the visitor’s saviour. Our next visitors with a Lancashire side Orrell, who played superb rugby in the game in which he finally ran out winners.

On Easter Saturday in front of the largest crowd of the season Cardiff’s initial surge momentum against the Barbarians was blunted and then overcome by Baa baas pack well led by England captain Billy Beaumont and a speedy confident backline. We lost 20-8. On Easter Monday a changed Cardiff side containing many challengers seeking places against Swansea in the next round of the Cup comfortably disposed of Harlequins 20-26.

Our cup game against Swansea at Aberavon arrived with the all Whites firm favourites after an immense forward effort against the Baa baas on Easter Monday.  Swansea dominated the first quarter of the game led 15-3 only be pressurised by a frantic Cardiff ‘blitzkrieg’ in which two magnificent length of the field tries were scored. But at the end of the game it was 18-13 to Swansea and we wish them well in the cup final.

An opportunity to redress the balance occurred the following week when we disposed of the two cup finalists. Newport were well beaten 29-8 on the Arms Park by a rejuvenated pack and some incisive three-quarter play and Swansea were defeated 16-12 at St Helen’s in game punctuated by injuries and replacements.

Messers Bowes and Nyham and others avidly looked forward to the Cornish tour. We stayed in Penzance and were not disappointed, the Cornishmen were thrust aside in a 46-3 blitz as the club ran in 10 superb tries. Following tradition the Sunday visit to Seaman Cove saw us win 37-9 in driving wind and rain. On the Monday unfortunately the club had to send a much depleted side to Neath the last game of the season and subsequently lost 31-13

Certain players have naturally in consequence of the team success attained national honours on the eve of the Baa baas game it was announced the Cardiff RFC have six representatives in the Welsh squad to tour Australia, namely TG Davies Pat Daniels Gareth Davies Terry Holmes Mike Watkins and Stuart Lane. We offer sincere congratulations good wishes and bon voyage to them.

Likewise again to TG Davies on equalling Ken Jones of record number of caps and Gareth Edwards on reaching 53 caps not out and to Barry Nelmes on  deservedly regain his England position. To Mike Watkins and Stuart Lane for caps in the Wales B versus France game. We also offer sincere congratulations in this respect too to a good friend Brynmor Williams now with Newport.

My personal thanks go to John Davies my vice-chairman who supported me wholeheartedly through the season, to Brian Mark fixture Sec extraordinaire, to Keith Rowlands who represented East District for us so capably, to the Rotary committee good men and true and in particular to a hard-working selection committee and to our club coaches John Evans Chris Padfield and Roger Peart, to Ken George and his conscious and cooperative office staff to the ground manager Albert Francis at all his stuff together with Bill Hardman, to Mr Harold Richards the club doctors physios and clubman source for the medical expertise, to our steward and stewardess Norman and his wife and their bar staff, the wholehearted efforts on our behalf to the supporters club led by Ted John for their loyal support, to the St Albans band and the conductor John Williams to Don Davis and all the club stewards and to all club members everywhere.