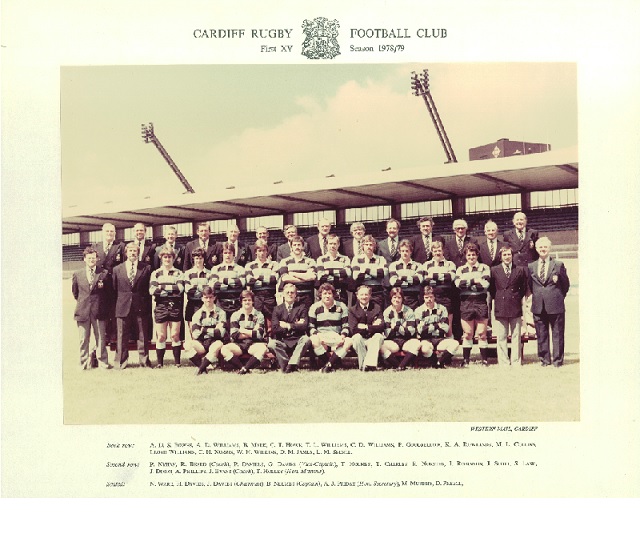 The heady days of mid-August with the sterling wins in the Aberaeron Sevens and the CHSOB Jubilee Sevens were soon overshadowed by the retirement of Gareth Edwards and the resignation of Gerald Davies as club captain. Notwithstanding such traumatic beginning, the winning of the Bridgend International Centenary Sevens and the appointments of Barry Nelmes and Gareth Davies to the leadership of the club, ably advised bt that seasoned campaigner Mervyn John in charge of the Rags for a second term, ensured that initial stability to play the traditional Cardiff game and to peruse the two avowed Club aims of defeating the All Blacks in October 1978 and winning the WRU Cup in May.

To scale these twin peaks of rugby achievement the arrival of internationals Hans de Goode from Victoria and John Scott from Rosslyn Park plus Robert Norster from Abertillery augured well in stiffening the Cardiff pack for the battles ahead. An already good young squad of players was further strengthened later in the season by the introduction of John Dixon from Abertillery and the return of our prodigal son Brynmor Williams from Newport. But the road of good intentions was to be paved with many difficulties and obstacles both on and off the field, not least the disciplinary action required against Mike Watkins prior to the Wales-France B game. That was a salutary lesson to all our playing squad, stressing yet again in the most serious term that individual discipline and the reputation of the Cardiff Club go hand in hand.

The season in retrospect

For CRFC the 1978/79 season overall was like the proverbial Curate’s egg – good in parts. The season fell naturally into three distinct phases – a vigorous and sustained start up to the New Zealand game; a period of mixed fortunes up until Christmas time; and in 1979a laudable resurgence to the end of the season. With 10 out of 11 games won up to and including Northampton, a victory against an untried, new look New Zealand side appeared likely, but in the final analysis a magnificent first half Cardiff forward effort was not matched by mature and tactical back play, and the result was 17-7 in favour of Graham Mourie’s Eighth All Blacks. From thence to Christmas time the Club’s fortunes ominously vacillated and only five out of 11 games were won. Then, before the New Year could be rung in, a heart-warming resurgence began with the home defeat of Pontypridd and overall the 1978 record showed 14 victories and only four defeats. Unfortunately the optimism engendered on Boxing Day was dissipated in the Ice Age climactic conditions of January and February. Following the saga of two postponed games and one abandoned against Pontypool, the sweet taste of victory in the WRU Cup at Pontypool Park was so shortly enjoyed as within one week Cardiff slithered out of the Cup to Pontypridd in a paddy-field of Sardis Rd. And whilst recriminations flew thick and fast, Bridgend arrived at the Arms Park and left with yet another typical victory under their belts. The team’s tremendous victory after three years in a running against the Barbarians, and the outstanding personal contribution of Terry Holmes with three tries in nine minutes, redeemed our rugby reputation and thankfully the season ended on a high optimistic report. The attendance at the Baa Baas game of our Club President Mr. Hubert Johnson on his 74th birthday, after his long illness, brought tributes from Committee, players and members alike.

In the realm of Sevens, though we remained champions from August 1978 to May 1979, as witnessed by victories in the Aberaron Sevens, CHSOB Jubilee Sevens, Bridgend Sevens and the Northampton Sevens, a second string Cardiff team in a lack-lustre performance was ignominiously tumbled out of the 1979 Snelling Tournament by enthusiastic, skilful Penarth and Maesteg. For the first time since its inception Cardiff will not play in the WRU Sevens Tournament.

Overall during the playing year, the team’s basic potential was not fully realised, and too often inconsistency and susceptibility in pressure situations induced tactical errors which resulted in defeats. Lets hope that the harsh realities and experiences gained this year can be hardened and tempered this coming August on the Club’s projected tour of South Africa

For the Rags, 1978/79 season has been a highly successful rugby story of consistent, high standard, enjoyable open rugby, and not since seasons 1884/85 and 1885/86 has success been measured in ‘invincibility’. Rather like D. J Hayward before him, Mervyn John can rightly retire with his star in the ascendancy. The team’s good fortune has largely been owed to his quiet and patient leadership, plus a calculated mixing of senior and younger players, and measured at its highest in a string of 15 victories of over 30 points each. Only Gareth Davies and Terry Holmes did not participate in this success. The vagaries of Silver Ball organisation meant relegation from that competition, even though both finalists Bridgend Sports and Llanharan succumbed to the Rags during the season. Old enemies Coventry extras, Newport United and Pontypool United were notable Rags ‘doubles’ and Cork Constitution were all well received at the beginning of the season and suitably dispatched.

Enjoyable commemorative games were played against CHSOB and the President of Wiveliscombe’s XV and the tour to North Wales resulted in defeats of Bangor and Llandudno. The Club can look forward next season to celebrating the special centenary of the Rags in proper and fitting style, though lacking the leadership of Mervyn John, who has announced his retirement from rugby.

The statistical list which are recorded bear testimony to team and individual performances. The awarding of caps is a unique Cardiff tradition and it is fitting that congratulations be offered to R Norster, H de Goode, J Scott, D Preece, J Dixon, H Davies A Yeandle, J Whitefoot and M Henry. Leading points scorers were Gareth Davies, T Holmes, J O’Brien and J Pritchrd. Our contribution on the international field was immense in the selection of G Davies and T Holmes for Wales throughout the current season and J Scott for England. S Lane in Australia and against Ireland A. Phillips against England continued the trend. And as B Nelmes went out of the England team another young Englishman H Davies seems set fair for similar honours.

To the rugby committee, all good men and true, I offer sincere thanks for your unstinting support throughout the year. My special thanks go to H Norris (Vice Chairman) A Priday (Hon. Sec.) P Nyhan ( Asst. Hon Sec.) K Rowlands (WRU delegate) L Williams (East District Delegate) and B Mark (Fixture Secretary) for their good counsel and sympathy, and in particular to the hard working Selection Committee, including the club coaches, J Evans, R Beard and P Davies, for the time and energy spent conscientiously in selection and organisation of coaching.  John Evans, an ex-Cardiff player, has now announced his resignation after four years of coaching CRFC. His loyalty and inestimable service have never been in doubt and we shall always accord him a special welcome in the Cardiff clubhouse.

To K George and his office staff; to  A Francis, ground manager and his staff together with B Hardiman; to Mr H Richards, the Club doctors and dentist, physios and masseurs; to Mrs G Parsons, Stewardess and her bar staff; to the Supporters Club and Mr and Mrs T John in particular; to D Davies and all the club stewards; and to the St Albans Band – I am exceedingly for the effort and time that you have all expended to make Cardiff RFC the great club it is.

To Mrs D Pill and family, we pay great tribute to her late husband Don Pill, CRFC committee man, who so admirably served the junior section and whose passing has been a tragic loss to the Club and to the rugby world.

And finally to Mike Knill, who let Cardiff for pastures greener in Penarth, and that most popular and genuine Canadian Hans de Goode, who now returns to Victoria, Canada we offer them ‘thanks’, good wishes and ‘you’re welcome’.

Player of the year: Matthew Hadley

Outstanding team performance: On 30th April at the Memorial Ground versus Bristol Colts. Despite having nine players engaged in District Training beat Bristol 13-4.