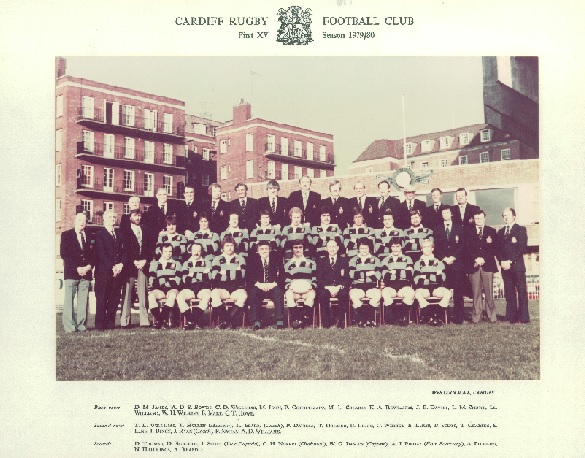 To be appointed Chairman of Cardiff Rugby Football Club must be the ultimate honour in the game after 21 years involve­ment with Cardiff. Last June I experienced the same feeling of pride and distinction that I did in September, 1958 wearing the Blue and Black jersey for the first time. This pride has increased game by game and year by year. I accepted the Chairmanship with some feeling of trepidation, but these fears were completely unfounded. It soon became apparent that everyone’s aim was to make my task as enjoyable and successful as possible – thank you all.

Training commenced earlier than usual this year due to the South African Tour scheduled for August. Our Tour Manage­ment, Brian Mark and Lloyd Williams, led the party with new captain Gareth Davies and coach John Ryan. We had accepted a strong provincial fixture list but with hard work, commitment and dedication the tour proved to be an outstanding success both on and off the field and a record of fixtures and results reads as follows –

Against Western Province – one of the strongest sides in South Africa, we were well and truly beaten by a superior side. The other game lost was against Northern Natal – a game that we let slip rather than them winning – an occurrence to be repeated later in the season. I’m sure that the Lions Tour of 1980 will put into perspective our success in South Africa.

One of our stipulations before the tour was that we play a full multi-racial fixture. This game against Northern Natal at Newcastle made history in the area and was welcomed by the officials who were anxious to play more of these fixtures. Perhaps Cardiff R.F. C. have opened a little wider the door to multi-racial sport in South Africa. An excellent Press was received both on and off the field and it was generally felt that the standards and traditions of Welsh Rugby had been upheld by the Cardiff Rugby Club.

Our domestic season opened on September 1st against East District with a 66-8 win. Throughout the month we played attacking, attractive rugby and our only reversal was at Coventry 15-16. Especially pleasing was our fine win over Canada 19-8. At the end of the month we had amassed 243 points for and 74 against.

Wednesday, October 3rd arrived and with it Bridgend – and in keeping with recent previous seasons we lost at home 9-17. Who can explain it or know the reason why? A very pleasing result was our away win at Pontypridd 13-10 a result which raised our game to give results over Northampton 45-4, Newport 21-12 and Cambridge University 27-12. Another Wednesday fixture under lights at Pontypool Park gave “Prosser’s Boyo’s” a resounding 28-10 win. Closing the month, a strong Selected XV played at the Arms Park for the Don Pill Memorial Fund and although losing 15-27 the only result that mattered was the financial benefit to Don’s wife and children – a fitting tribute to a fine sportsman whose work with the Cardiff Youth and Cardiff Committee will always be remembered.

Cardiff became “World Champions” in Cork on November 3rd beating Munster 15-13 – the previous season’s conquerors of the All Blacks. The commitment of our W.R.U. Cup programme began with a first round draw at home to Waunarlwydd. They enjoyed the experience of playing at Cardiff as did Wrexham in the next round. We just 14-18 at Stradey Park, but probably the outstanding game of 1979 was our much awaited game with Swansea – Cup favourites and front runners for the Western Mail Championship. We won well 21-17, the game being voted by the Press and supporters alike as the match of the season. Yet another Wednesday evening and another defeat at the hands of Maesteg 13-19. We closed 1979 with victories over London Welsh 50-12, Aberavon 36-8, Pontypridd 19-3 and Coventry 33-13. To date our playing record was Played 28, Won 21, Drawn 1, Lost 6.

January, 1980 provided success and defeat – recording victories over Bath and Moseley two of the most attractive English teams but we were knocked out of the W.R.U. Cup by Pontypridd 6-13. Their success must first and foremost belong to Tommy David whose inspired leadership by personal example and dedication to Ponty’s rugby led to our downfall – a dedication we must strive to emulate. The game at Aberavon was a tribute to rugby football – although losing 22-29 it was prob­ably the most attractive game of the season.

February was our only completely successful month with five good wins over Ebbw Vale, Bristol, London Welsh, Heriots F.P. and Wasps –: many thanks for their willingness to fill in at short notice. This month our new floodlighting system was switched on, which I know will be appreciated by players, supporters and Television Cameras.

March was a disaster, we lost to a strong San Isidro side 10-16, Pontypridd 4-10 and Bridgend 3-4 – by a Steve Fenwick try in extra time. Obviously, without our Welsh halfbacks, Cardiff’s rugby was lacking somewhat.

The final month of the season appeared to sum up the whole campaign – very good in parts, disappointing in others. The Barbarians convincingly beat us 15-32 but we completed our Easter programme with a 26-18 victory over Harlequins. To defeat Swansea at St. Helen’s is an achievement. Our 15-6 win was some consolation for several lack-lustre performances.

Defeat at Neath 19-25 completed our away fixtures, but who could possibly have imagined such a grandstand finish at the Arms Park, in defeating Llanelli 45-12 we scored nine sparkling tries and the final one by Derek Preece, on time, gave the Cardiff XV a record points tally of 1,090 for the season – we put it together in the end!

Our full playing record for the season is as follows:-

Although losing 13 games this season our total points score of 1,090 is impressive. There were 170 tries with 79 goals and 91 tries. Obviously the style is right – but we must put our game together. Of the tries scored 130 came from the backs and 40 from forwards – surely emphasising our attacking attitude. If no success was gained in W.R.U. Cup or Western Mail Champion­ship surely the fact that we have nine Cardiff players representing either the Lions or Wales on tour this Summer is achievement enough to keep the name of Cardiff R. F. C. revered and respected throughout the world.

Congratulations to our Captain Gareth Davies together with Terry Holmes, Alan Phillips and Stuart Lane on their Lions selection. Congratulations to Chris Webber, Pat Daniels, Dave Burcher, David Thomas, Bob Norster and Kevin Edwards on their s􀂿lection for the Wales Tour to U.S.A. and Canada.

Home International Honours were gained by Gareth, Terry, Alan and Stuart together with our English No. 8 and Vice­Captain John Scott – surely the most unfortunate not to be in South Africa.

First XV Caps were ·awarded to:

Roger Lane, a ‘Blue and Black’ through and through was appointed Captain of the Rags in this their Centenary Year. No other player deserved the honour more. His years of service to Cardiff R.F.C. have surely inspired many of the younger players in the Rags this season-especially so when you consider that he was the top try scorer with 19 tries. We all wish Roger and his family success and happiness in Penzance. He will prove a valuable asset to Penzance and Newlyn Rugby Club both on and off the field.

The season was not as successful from a playing record as was hoped following the previous season’s impressive record and performance.