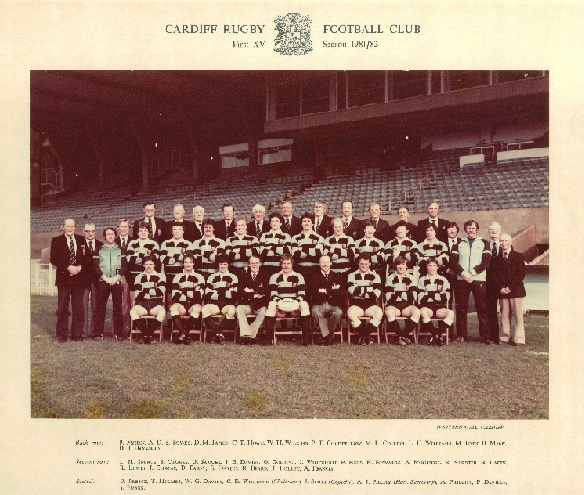 In my opening paragraph of last season’s report, I wrote that I felt I had obtained both “the penny and the bun” as I had been fortunate enough to have achieved both the captaincy and the chairmanship of the Cardiff Rugby Football Club. This year on being re-elected Chairman I suppose I can say that I have had “two bites of the cherry”! In all seriousness I am fully conscious of the unique honour which has been bestowed on me. Again in last season’s report I made reference to the impending tour of Zimbabwe. I am delighted to say that under the enthusiastic management of Malcolm Collins and Mervyn John, ably supportedby the acting captain, Gareth Davies, the tour was an outstanding success. All five matches were won and the hospitality was tremendous.

By now all members will be aware that Les Spence, the Athletic Club President, decided to call it a day and retire from the RugbyCommittee. He had served the Rugby Club as a player and administrator for 52 years; fortunately, his vast experience is still available to us. The committee places vacated by Les and Lynn Williams were filled by two past captains of the Club notably David Hayward and Gary Davies.

Another pre-season resignation, on personal grounds, was that of John Ryan, the senior coach. Although we were sorry to lose John we were fortunate in maintaining continuity through the appointment of Roger Beard and another former Cardiff player Gary Samuel was brought into the coaching team.

An air of expectancy blows through every club as each new season dawns, and we are no exception! Can we retain the Cup? Will weachieve the double of the Western Mail Championship and the Cup?

These were some of the questions on everyone’s lips. Prior to the season we won the Snelling Sevens tournament beating the guestside, Leicester, in the final – was this a portent?

Minus our captain John Scott, who unfortunately had had operations to both his ankles, September saw us off to a good startincluding wins at home over Neath and Bristol and away at Pontypridd. A draw at Coventry was followed by a defeat at home byAberavon. On reflection, it may have been a blessing in disguise to lose our ground record so soon.

If September had been a hard start to the season with eight matches October saw us playing nine games, six of which were away.Our only defeat was at Pontypool Park where the previous season we had been beaten ignominiously, but our performance this time was much better. Victories at home over Northampton, Bath and-wait for it- Bridgend, were followed by further wins including mid-weekaway games at Maesteg and Newbridge which pointed to the quality and spirit of the team. By now with only two defeats there was talk of the possibility of the “Double” even though Swansea and Pontypridd possessed outstanding sides and our defence of the Schweppes Cup had yet to begin.

The 6th Wallabies also arrived during October. Although we had not been granted a fixture with them, it was our privilege andpleasure to act as hosts to Sir Nicholas Shehadie and his party at an informal buffet held in the Clubhouse. Whilst appreciating the views of those who arrange tour fixtures, we were extremely disappointed at not playing the Wallabies particularly as our record against Australia is the best in the Horne Countries having won all of our previous five encounters.

During the month I was more than delighted to present a cheque on behalf of Cardiff Rugby Football Club for £4,000 to the W.R.U. Charitable Trust. This money was, in the main, raised at the Gala Dinner held in the City Hall last May and was in addition to the £1,000 previously donated by the “Cardiff 1953” side.

Three home games in November saw us register wins over Munster, Oxford University and Ebbw Vale whilst we commenced our defence of the Schweppes Cup with an away win at Barry still without the Club Captain. In his absence, however, his vice-captain Gareth Davies was doing a magnificent job. Another away win atLlanelli on November 27th saw us take the lead in the Western Mail Championship – could we hold on?

December saw fixtures become decimated with bad weather, these included our second round Cup game against Glamorgan Wanderers but with the agreement of themselves and Bridgend, who commendably forfeited a plumb date for a home fixture we were able to re-arrange before the end of the month. Our success in this game and against Pontypridd meant we had stretched our number of consecutive wins to 12 – this started the historians delving into past records!

Despite further problems created by the weather we registered four more wins in January. From the result aspect the game at Aberavon under lights was probably the most important but from an overall viewpoint the return of “Scottie” to lead the side againstBective Rangers was the most significant.

The postponed third round Cup game against Ebbw Vale was eventually played at Eugene Cross Park and although we won by 22 pts. to 6 the score somewhat flattered us. Our mid-week re-arranged home fixture against Swansea resulted in a resounding victory with superb support play and handling despite atrocious conditions. The following Saturday we returned to Ebbw Vale and again emerged victorious; I cannot recall another instance whereby we played the same opponents on consecutive Saturdays. Meanwhile the Old Player’s Reunion which was a tremendous success took place on Friday, 5th February and again was held in the Top Lounge of the Clubhouse.

Having been drawn away for the first three rounds of the Cup it was a great relief, and a bonus, to be drawn at home for the quarter-final since, if we were fortunate enough to win, both semi-finals and final are played on neutral grounds. The game against Llanelli was hard, but on the day our pack proved itself once again and we won 12 pts. to 3. This was our 20th consecutive win.

The first Saturday in March saw us winning well against London Welsh at Old Deer Park and by another quirk of re-arranged fixtures we played and again beat Llanelli at home on the following Wednesday. Then came one of the finest club matches seen for many years. With Pontypool “hot on our heels” at the top of the Western Mail table we could be forgiven for anticipating a dour game but it turned out quite the opposite. Although the game was vigorous it was exceptionally fluid as the score of36 pts. to 23 in our favour illustrates. The season was gradually coming to the boil!

However, there was one depressing feature-the injury which Terry Holmes sustained against England at Twickenham. A win against Heriots F.P. saw us ready to face Newbridge in the semi-final at Newport, and what a game that turned out to be with the team coming from 11-10 down to win 21 pts. to 11 pts. One interesting point was that in the previous year’s semi-final Terry Lee had scored to clinch the game, whereas this year it was Gwynfor Williams who regained the lead. Two tremendous scrum halves and club men. This win gave us 25 consecutive victories which tied with the record achieved by the 1947-48 and 1885-86 sides, but the creation of a new record was not to be. By now reactions both physical and mental, particularly after extremely hard matches were creeping in. It was therefore no surprise that we lost to a very strong Swansea side – who had not played for over a week -at St. Helens on the Wednesday following the semi-final.

A narrow win at Bedford and a narrower defeat at Bridgend – our Cup Final opponents – followed. However, on Easter Saturday, coincidental l with the return of Terry Holmes the side peaked again.

After trailing by 10 pts. to 3 we beat the Barbarians by 36 pts. to 31 in a fast and furious game played under ideal conditions. The news that Swansea had lost to Harlequins was cause for extra celebrations since now we could not be overtaken in the Western Mail table – November 27th, 1981 to 10th April, 1982 had seemed a lifetime! Two victories over the Harlequins and Neath followed and once again we faced Bridgend at the National Stadium. As expected it was a hard game but even so was fast and most exciting. We made a disastrous start being 9 pts. down after six minutes but the character and determination of the side were not to be denied and by reason of Ian Eidman’s well timed only try of the season, the game and the Cup was ours even though the scores were level at 12 pts. each.

Two days later Alun Priday, Roger Beard and John Scott led a tour party to South Africa following an invitation from the PretoriaHarlequins to play in an international club knock-out competition. Additional games were also played against Natal in Durban and aWestern Province XV in Cape Town. As the recent World Invitation touring side discovered the standard of play by the South African sides was particularly high, whilst considerable difficulty was experienced with the refereeing

interpretation of laws applying to lines-out, ruck and maul and tackle. The hospitality and reception by officials and all concerned was tremendous and on our part I have been informed and assured that the players conducted themselves on and off the field in a manner which was a credit to both Welsh and Cardiff rugby.

Points Scorers: Gareth Davies (188), David Barry (100). David Barry’s 20 points against the Barbarians is a record for that fixture.

It has been a season of abounding memories and another page – nay another chapter has been written into the history of “The Greatest”.

The season was a month old before Julian O’Brien was appointed Captain of the Athletic XV, a tough enjoyable but exacting task.Julian’s attributes included his versatility behind the scrum and his enthusiasm both on and off the field. These have proved of immense help throughout the season which, whilst not outstanding, did show a slight improvement on that of the previous year.

What was of greater significance, however, was the fact that of the seven caps awarded to Athletic players five were gained by formerYouth players. Not only may their success continue but may many others follow in their footsteps.