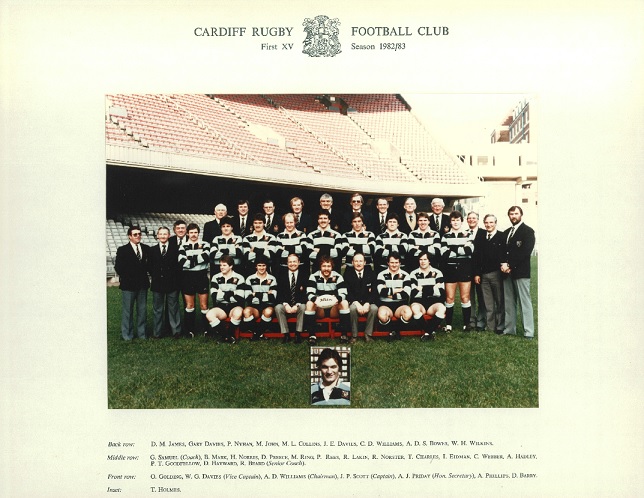 A former Committee man, after congratulating me on my appointment as Chairman of Cardiff Rugby Football Club for season 1982-83 remarked “enjoy it”. This I have done despite the disappointing results.

Before I start on my report I would like to welcome a new name and face to the Rugby Committee but certainly no stranger to Cardiff supporters, Ian Robinson. Whereas we welcome Ian and hope that he stays a long time I feel and hope we have not seen the last of Colin Howe who has put in an enormous amount of work on the Rugby Committee over many years.

Supporters may well ask ”What’s gone wrong this season”, after two successful seasons in the Cup and one in the Western Mail Championship. You may recall a statement made by Roger Beard (Coach) in the newspapers before the season started that both coaches after the success of last season would like to see more passing, less kicking and therefore more enjoyment for both players and supporters. Although the Committee viewed this statement with some concern they were prepared to wait and see what the outcome would bring. The outcome as we all know is now history and the statistics for September read played 8, lost 4, drew 1, won 3.

October saw the arrival of the Maoris with their fleet-footed back division and superfit forwards, some just like giants. Cardiff could not match them for speed and went down by 10pts.-17pts. Other sides in Wales to play the Maoris must have watched this game and made notes on how to counter the fast passing and speedy backs because from that game on with a few exceptions they were not allowed the same freedom to play their own game.

By Christmas we had lost 11 games but in the early part of November we saw signs that the Cardiff we all knew were starting to take shape when we saw convincing wins over Leicester 32-9, Llanelli 24-13, narrowly losing to Swansea 13-18 in December and crushing defeats of Bridgend 29-6 and Pontypridd 56-3.

We must of course remember that during this period there was a late start to the season by Terry Holmes and we had more than our fair share of injuries, in particular to Rhodri Lewis and Tony Mogridge and also that Kevin Edwards decided that he needed some time off from rugby, now returned and showing us how much he was missed.

In 1980-81 season Cardiff lost 13 games but still won the Cup. I felt confident with a fully fit side we could do the same. Our run in the Cup with wins over Cilfynydd, Gowerton and Blackwood caused us no real problems but we knew it would be a different story at Pontypool Park especially without the services of Terry Holmes who was recovering from a shoulder injury. The three-quarters were never able to capitalise on the sufficient supply of ball from the forwards plus missing vital penalty kicks in the first half, dashed our hopes of making it a Cup treble and we lost the game 9-13.

Easter weekend saw the popular Barbarians visit the Arms Park on the Saturday and the Harlequins on the Monday. The least said about the Harlequins game the better, for everybody in Cardiff that is, but full marks to the ‘Quins’. Against the Barbarians and without our captain John Scott we saw the true fighting spirit Cardiff are capable of when they came “back from the dead” to snatch a draw and with the last kick of the match could have won the game, the result 32-32.

The triumphs over Swansea and Neath show us what the season might have brought playing well controlled rugby.

In spite of the disappointing season, results wise, we can still produce two British Lions in Terry Holmes and Robert Norster and wish them on behalf of everyone connected with Cardiff R.F.C. a successful and injury free tour in New Zealand. A further great honour was that of John Scott to captain England, being the first Cardiff player to have achieved this. Congratulations also to Ian Eidman on his hat-trick having played for Wales B, Wales and Barbarians, to Mark Ring on his selection for Wales, to Jeff Whitefoot on his selection for Wales B and Terry Charles honoured by the Barbarians. Also Adrian Hadley, Mark Ring, Ian Eidman and Jeff Whitefoot have been selected to tour Spain with Wales this May, both Paul Rees and Owen Golding were reserves. Further honours will I am sure come to present youngsters in the Cardiff teams in the not too distant future.

Cardiff ‘s tour to Devon and Cornwall was a complete success with wins over Brixham 25-12, St. Ives 41-25 and Penzance Newlyn 60-7, the welcome in Cornwall as good as ever. Add these scores to the existing total for the season and we have a new club points record of 1,126, not bad considering we lost so many games. This total does not include the two Centenary games we played this season against Dinas Powis which we won 22-6 and Pentyrch 50-8.

First XV Caps were awarded to:

True to form the captaincy of the Athletic XV was not decided on by the start to the season. Terry Charles accepted the appointment but this did not stop him from playing for the First XV when required. One such occasion was the Barbarian game at Easter when his performance was appreciated so much by the Barbarians selectors that they asked him to play for them against Swansea on the following Monday, an honour well deserved. Once again the majority of ”Rags” caps gained this season were by former Youth players so continuing from last season and therefore showing the true value of running a Youth XV.