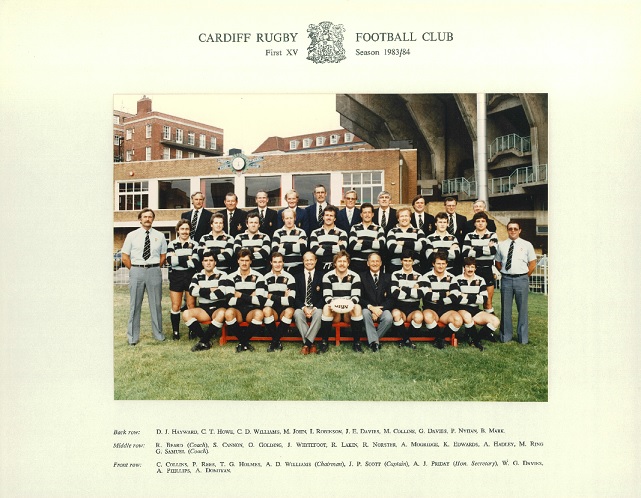 As I look back over season 1983-84 three major points come to mind: satisfaction, pleasure and concern.

Satisfaction in that the players have bounced right back this season. This I feel is due to improvement in performances by some of the younger players, the addition of experience to our playing squad and the welcome return to fitness of certain other members. Add to this the realisation by both players and coaches where they went wrong last season and their determination to show us they are more than capable of putting things together, and the result has been a very enjoyable and successful season.

Pleasure in that I rate the team spirit to be very high this season on and off the field. This I believe. is due mainly to the tremendous commitment by players and coaches to work together in raising money towards their Barbados Tour and I congratulate them on their achievement.

My concern, however, is the number of our players that are being sent off the field. Some members may argue that Cardi1T players are “got at” because they are Cardiff but that is something we have lived with for over 100 years and that is no excuse for the increase in sendings off from our club. We cannot always rely on a particular referee to be on duty to ensure that the laws of the game are adhered to and therefore ensuring protection for some of our players.

That leaves discipline. Anyone can pass judgement on who is responsible for discipline but in the end it comes down to the players’ individual self-control, only a lesson they themselves can learn, sometimes the hard way for no one player is greater than the club.

At the end of a long hard season we can all look back with satisfaction and pleasure at having won both the Schweppes Cup and Esso Welsh Youth Rugby Union Cup.

With regard to the unofficial Championship it’s been a season of ifs and buts. A slight hiccup against Centenary-celebrating Abertillery in the first game of September, well and truly beaten at Newport in October, losing an exciting game to Leicester in November, beaten by a single point at Llanelli in the same month saw us arrive Christmas Eve at the Brewery Field, Bridgend, looking as if we had eaten our Christmas lunch a day before we should have and we were punished by a well organised Bridgend side. It was over two months and 10 games later I felt all hope had gone of winning the Championship when against Pontypool at Cardiff Arms Park we did not capitalise on the many opportunities created and lost 11-16. From that day I am sure the players felt as well as myself that all concentrated efforts would be channelled towards the “Cup” with the possible exception of the Baa Baas when the players expressed themselves freely and looked as if they were thoroughly enjoying the Easter occasion.

Saturday, 28th April, 1984 will always play a special part in my memory. A day when everyone connected with the running of Cardiff R.F.C. this season, supporters, right down to the ball boys could stand and be proud of a very good squad of players. They have shown us we can look forward to many more seasons of good attractive rugby.

My thanks once again to Alun Priday for his support throughout the season. To Vice-Chairman and evergreen Stan Bowes for his help and I hope that he as Tour Manager and Gary Davies (Assistant) along with the players enjoy their tour to Thailand. To all the Rugby Committee, including Hon. Fixture Secretary Brian Mark who must see team fixtures in his sleep, and Peter Nyhan who has the difficult task of compiling the programme notes every week, my thanks to them all.

This has not been one of the ”Rags” better seasons, at least not by their standards, but they have tried to play open, attractive rugby when possible to build up confidence in the younger players, and for the benefit of those watching.

They have of course supplied many to the First XV when required and this does not always help their cause. On two occasions, against Harlequins and last game of the season Neath the Club were forced to play a near “Rags” XV as possible but on both occasions, although losing, showed much promise for the future.