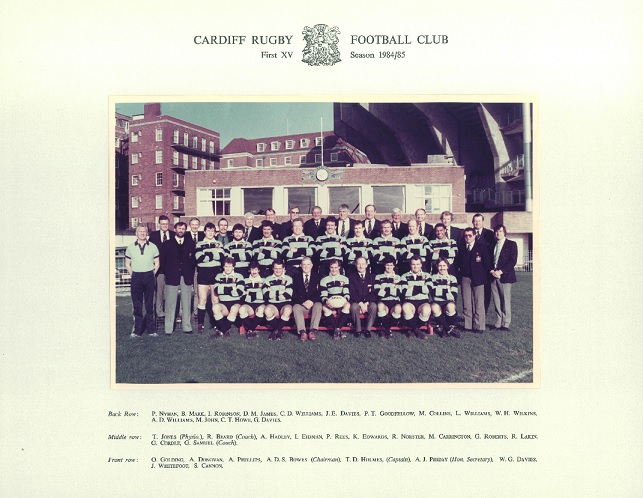 Having only achieved the captain of the ‘Rags’ as my highest accolade with the club, it was with some feeling of trepidation that I accepted the Chairmanship of the club, but I must say it was the proudest moment of my life. Chairman of the Greatest’ rugby club in the world.

My season really commenced in July when we undertook a far east tour to Bangkok which I had the honour to manage, with Gary Davies as the Assistant Manager. It was a very successful tour and enjoyed by the players (even playing in borrowed jerseys) who were great ambassadors, on and off the field with many friendships made.

August saw our entry in to the Aberaeron Sevens where we lost in the second round to the Sportswriters 16pts -14pts, who went on to win the final. Next day we participated in the C.H.S.O.B. Sevens only to lose in the semi-final to Glamorgan Wanderers 20-4. This was followed a week later with the Snelling Sevens where we disposed of Aberavon, Pontypool, Neath and Bridgend whom everybody expected to be finalists. However, our old enemy the ‘Black and Ambers’ were our opponents in the final and after a magnificent display, which we had also put up throughout the tournament we were victorious, with Mark Ring being awarded the Bill Everson A ward as the player of the tournament. Meanwhile at Llanelli Wanderers Sevens the Athletic Seven lost to Llangennech in the final 10-21.

An encouraging start to the season was made in September with home victories against East District and Glamorgan Wanderers. This was followed with an away visit to Neath where we had our first loss by one point. Then came an excellent game and a good win at Bristol, followed with wins against Coventry, Penarth, Aberavon, and Pontypridd. Having been invited to Garryowen to participate in their centenary year we took to the air for some excellent Irish hospitality, but regretfully forgetting to take the Cardiff mementoes, and coming away with another win under our belt. October 6th saw us play our ‘old enemy’ Newport who had made an inauspicious start to the season, and victory was ours 37-3. By this time the players were playing excellent entertaining rugby which brought us further wins over Bridgend and Northampton. Now a visit from Pontypool and with the ground filled to capacity with overflowing excitement a great game was witnessed with a superb 80 minute demonstration of forward power play, which was marred by the injury of Terry Holmes that brought alarm and despondency to all present. He was helped off the field and replaced by Steve Cannon, and the game ended in an honourable draw. With the Australian game a week away this was a tragic blow for Terry Holmes which was to keep him out of the game for a long spell. A visit to Cambridge followed on the

Saturday where we came away losing our second game of the season.

Now came the Wallabies on Wednesday, 4th October, the first occasion for Cardiff to play a touring team mid-week, when we had a poor attendance for such a game. Alan Phillips took over the captaincy and every player rose to the occasion to give us another victory. To be Chairman of Cardiff is indeed a great honour, to be Chairman when the club beats a touring side is a bonus few Chairmen enjoy, this being our sixth victory in six games. In retrospect the victory became more meritorious as the team on the day subsequently became their grand slam team.

A win against the Harlequins at home was followed by a disappointing loss at Newbridge with a weakened side, however we came back to top form against Leicester with a substantial victory 47-21. A home win against Oxford with a surprising loss at Ebbw Vale bringing us our fourth defeat of the season. In commencing our cup programme we met our old rivals Tonyrefail that being our third occasion to meet the Rhondda Valley club with a victory 22-9.

This started an unbeaten run of thirteen games without defeat and great credit must be given to the players for the style and tremendous entertainment provided, in particular Llanelli at home, and the drawn match at St. Helens.

During this sequence we witnessed some exhilarating rugby which was of the highest order in spectator value, and in the best traditions of the Cardiff club. The only thing which might have affected this situation was the cold spell which caused chaos to our own domestic fixture list and also the international programme. The resultant jostling to find suitable dates proved an impossible task for fixture secretary Brian Mark.

Our first game in March took us to Pontypool Park which people thought to all intents and purposes was a full dress rehearsal for the Schweppes Cup. As you know on the day we suffered a heavy defeat by 24-6. Some return to grace was achieved against Bective Rangers on the eve of the Irish International winning with a weakened team by 41-25. Saturday, 23rd March, 1985 will probably go down as one of the great victories in Cardiffs history, Pontypool must have been brimmed full of confidence after their very comprehensive victory of the previous fortnight. We all know what happened on the day, and with the size of our victory, the rugby world was astounded. At this stage of the season with an International Match still left to play and our own game against the Barbarians left to follow, it became the unanimous decision to abandon any hope of rearranging postponed matches in order to relieve the immense pressure to which players had been subjected, which resulted in the loss of five home games and three away games.

The Barbarians annual visit again produced a feast of very acceptable rugby which brought us a very fine victory of 44-20 over a very strong Baa Baa’s side. This was followed by a good win with a much weakened side against South Wales Police and a very comprehensive victory over Swansea on the Arms Park. As this game was the final home game of the season the victory ensured a home ground record for the first time since 1946-47, which again reflected great credit on the players when one looks at the quality of our fixture list.

The game proved a tragedy for Mark Ring and Cardiff in general, to suffer such an injury, especially being the Home International Championship player of the season, and his tremendous flair will be sadly missed on the rugby scene. Once again Terry Holmes did not enjoy a season free from injury, but his presence and commitment was always an inspiration to the team, and a joy to behold.

All that now remained was to get our hands on the cup for the fourth time in five years. The day was to prove a very disappointing one for us after such a magnificent season during which we proved we could adapt to any style in order to achieve victory. On the day the anticipated classic final did not materialise and Llanelli took the spoils by the odd point in 29.

Our leading scorer for the season was again Gareth Davies with 365 points bringing his grand total for the club to 2514 points, this being tenth time in eleven years. Leading try scorers were A. Hadley 20, T. Holmes 17 (bringing his record to 114 club tries). G. Cordle 17, M.Carrington 16, A. Phillips 14 M. Ring 14. It is interesting to note the Captain elect is now fifth in the try scoring records of the club. Bleddyn Williams 188, J.L. Williams 150, A. Comish 149, A. Finlayson 135, A. Phillips 130, Codger Johnson 129. Adrian Hadley made the highest number of appearances with 32 followed by Gareth Davies 31, and Alan Phillips 31, with 1st XV Caps awarded to M.Carrington, G. Cordle and Gareth Roberts. Adrian Hadley made his first Barbarians appearance at Swansea.

It was a very successful season having finished second to Pontypool in the Championship, having played 40 games, won 32, lost 6 with 2 draws, with our highest standard maintained throughout. Our representation on the International field was 8 players and congratulations are extended to new full Welsh caps Geoff Whitefoot and Gareth Roberts and to Paul Rees on Welsh B selection. In the Scotland International it was Cardiff’s best representation since 1953 with 6 players having taken the field.

The team was captained for the third time by Terry Charles giving another excellent service with his captaincy of our Sevens teams. He joins an elite group having captained the Rags three times. He cemented player/ committee relations through organisations of fund raising and social events, and took the ‘Rags’ to Sale and Lymn on a successful tour.

The ‘Rags’ season was the best for four years, for the first time in scoring 1,000 points, owing to a free running approach to the game. Nine games, a flood of tries, and over 40 points were scored in each of these games. The team went through the season with only four losses with Swansea Athletic wins home and away. Losing to Blackwood in October by 16 points to 10 at home the last game of the season, saw the ‘Rags’ win 45 points to 6. Bath United were the only other team to record a victory against a weakened side by 14 points to 4.

The injury to Neil (Cheeky) O’Brien in the Snelling Sevens last August deprived us of the services of a young outstanding player. We wish him a speedy recovery.