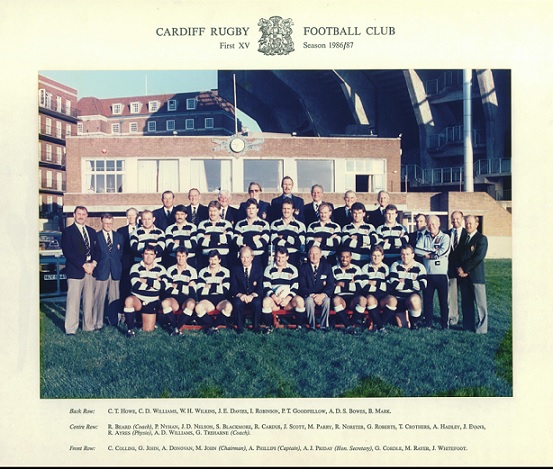 The year began with our major concern the requirements of the Safety of Sportsground Act. It soon became evident that our Local Authority was not prepared to be sympathetic with a gradual improvement to one of the most modem grounds in the U.K. After an enormous amount of work and time they eventually agreed that our games could take place in September. Our Wednesday night game against Pontypool in October was only cleared late on the Tuesday evening preceding the game. However, we have now almost completed the necessary work and continue to have one of the safest most modem Rugby Grounds in the U.K.

With the retirement of Gareth Davies and the loss of Terry Holmes last year our season started for the first time for many years without an International Half-Back. Our International players had also been asked to limit their games to one per week, while within the first week of the season we were to lose our Captain Alan Phillips through injury for a number of months.

However, we opened with a trio of wins over centenary celebrating St. Peters, Glamorgan Wanderers and the District XV but soon the first indication of our loss of form came with heavy defeats at Bristol and Neath, where the home side showed the form that was to trouble so many sides this season. Good wins over Coventry and Pontypridd were followed by a defeat at Aberavon where at one stage we held a 22-9 lead. Our indifferent form continued into October with the reverses at Bridgend, Bath and the Wasps but success over Newport, Northampton, Harlequins and Pontypool where we will all remember Adrian Hadley’s last minute 80-yard touch-down.

Struggling to find a successful consistent pattern of play with many mistakes and a high points against average our Vice Captain Alun Donovan in the absence of our Skipper Alan Phillips, worked admirably to allow us to reach the end of November with a home record intact registering further wins over Leicester, Oxford University, Ebbw Vale, Newbridge and Bangor, Northern Ireland with only a draw against Llanelli. November also saw the start of our defence of the Schweppes Cup with a victory at Treorchy by 14 points to 7. An interesting headline in the South Wales Echo the following Monday read “Put Cash on Cardiff Sid” suggesting that “a modest investment on Cardiff to retain the Schweppes Cup could prove an even more attractive return than British Gas Shares”.

We were at our lowest ebb in December with defeats at Swansea, London Welsh, a draw at Bridgend and the loss of our home record on Boxing Day when Pontypridd, a team struggling to find their form, took the honours. The only festive cheer was the Schweppes Cup victory over Cross Keys where for the first half we displayed quality Rugby which defied both the conditions and our recent indifferent form. 1986 closed with 9 losses and 2 draws in 27 games, there was no consistent form yet our Squad was not dissimilar to previous years.

1987 started with a good victory in the Gas Challenge match against a Bath side sadly depleted because of a last minute England trial and this was followed by home wins over Moseley and Aberavon. The Cup match against Llanharan and again we returned to our inconsistent form. Full credit to Trevor Worgan and his Llanharan heroes for coming within an ace of a historic victory at Cardiff.

All our attention in February was on the Cup and our forthcoming fixture with Newport, wins over Sale and Bristol losses against Maesteg and surprisingly Ebbw Vale but the Cup victory over Newport, our traditional enemies, was surely a turning point with two months of the season remaining. Once again it was the Schweppes Cup that had sent the adrenalin flowing and the thought of yet another Schweppes Cup final was uppermost in everyone’s mind as we proceeded to find our more traditional form for the remainder of the season. Apart from our loss at Pontypool a final draw down of the season brought 9 good victories over London Welsh, Penarth, South Glamorgan Institute, Derry, Bedford Swansea, the Barbarians and Neath. The latter for the second time within a month when once again our clinical Cup form destroyed the high riding Neath at Swansea in the Semi-Final

The climax to our season saw our victory over Swansea in the Schweppes Cup Final after extra time, a fitting finale to Alan Phillips two terms of Captaincy, a magnificent all round team performance displaying the skills of defence, soaking up the pressure, while taking each opportunity given to out point the opposition with Geraint John’s penalties, that well taken try by Gerald Cordle and who will forget that Mike Rayer drop goal!

Our congratulations to Jeff Whitefoot, Robert Norster, Adrian Hadley, Mark Ring and Stephen Blackmore on gaining International honours and good luck to them together with Gareth Roberts and Alan Phillips as our seven representatives in the Welsh Squad for the Inaugural World Cup. The late call up of our skipper after five seasons in the International wilderness is a just reward for his consistency and patience. I wish someone, somewhere, in authority could explain why this exceptional player has been overlooked during a period while he has been at the peak of his Rugby career.

We wish them all success to return with the Webb Ellis Cup. While they are in Australia and New Zealand our players are breaking new ground in Spain. I am sure they will uphold our Cardiff name and traditions under the guidance of the Tour Manager, Lloyd Williams and Assistant Manager Ian Robinson.

My personal gratitude goes to all Committee Men who have supported me loyally and conscientiously throughout the season. A special tribute to Alun Priday our Hon. Secretary for his ready assistance and for the tremendous amount of work which he carries on behind the scenes. Our Club Selectors, Vice Chairman Gary Davies, C. D. Williams and John Nelson performed admirably with an unenviable task on many occasions.

I pay tribute to Alan Phillips and his Vice Captain Alun Donovan for their leadership and to the dedication of our ever present Coach Robert Beard who was ably assisted for a short while with Dennis John and latterly with Gwilym Treharne another ex-player who I am confident will give Cardiff good service in the coming seasons.

It was sad to see Kevin Edwards enforced retirement through his eye injuries. This confident bouncy Second Row whose charging runs were as much a characteristic as his boxer snorts in the rucks was very popular throughout the Club I wish him good health and happiness in his future.