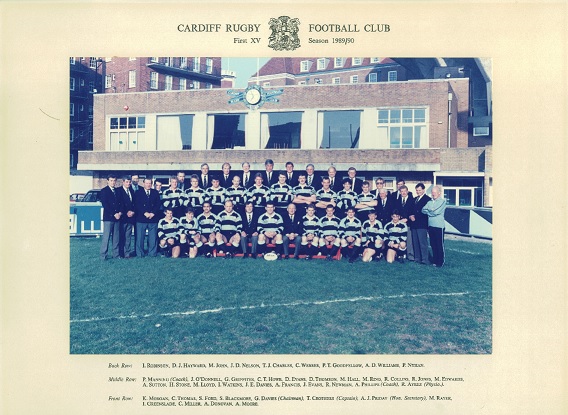 If the great traditions of Cardiff Rugby Football Club are to be rejuvenated an enormous amount of work is a necessary part of the opening paragraph of my report last year. Following the 1988-89 season I pointed out that my priorities were to be the careful consideration of the structure and organisation of our Club and to put our own in-house activities and ideas in order.

I described the progress we had made in this direction a new selection formula, new coaches and our full support of the Cardiff Schools Rugby Union. Other contentious issues were resolved. At last a decision was made on our Whitbread Merit Table policy. We became full members instead of being on the fence for so many years. The end product of the season was that we lost 14 of 43 matches played, with 1,004 points for and 770 against.

My elation on being elected Chairman for a second term of office 1989-90 was quickly overcome by events that needed immediate attention. After an indifferent season Gwilym Treharne and Brian Lease had been relieved of􀀑their duties as coaches. Much to my chagrin Gwilym and Brian read this in the local press before they could be officially informed. An official apology was made to both of them as I explained at last season’s Rugby A.G.M. May I thank them both for the work they did during their season as coaches.

Various candidates were interviewed and Alan Phillips and Peter Manning were named as the new coaches. Terry Charles replaced C.D. Williams as Senior selector for the 1st XV. As intimated above we were weak in many positions and, therefore, a vigorous development and recruitment policy was necessary. Our Youth and schools representatives worked hard to ensure that our non-Cardiff and South Glamorgan young prospects came to Cardiff and were not lured elsewhere. As a result of this, during the season, we secured U-21 internationals Ryan Buckley, Paul John, Tony Orrell, Stuart Roy and Ceri Thomas· Welsh Schools internationals Geraint Lewis and Kevin Morgan; Welsh Youth internationals Jonathan Westwood and John Humphries. Matthew Lloyd and Andy Moore are continuing to develop. In addition to these new recruits, I have already referred to our support for the Cardiff Schools and their alickados, Jack Lewis and David Williams etc. They have come up with our first, and very successful, U-16 side.

A formidable number of new players to Cardiff by anyone’s standards. Admittedly, they did not all join at once. But they will all be available for the new and most important season ahead which augurs well for the Cardiff team’s future in the first season with the new league system in operation.

Therefore, with two new coaches, a new senior selector, many new and promising young players in contention and established players, some already capped by Wales, joining us at this early stage of the season I thought that this “second year of change” was going to achieve success on the field for which we were all working so hard.

On 14th October I actually thought we had made it with a fantastic performance by our team against New Zealand at the National Stadium. Clearly ahead at half time, with a Mark Edwards try and Mike Rayer’s conversion and penalty to a penalty-let’s be fair, we all thought we could do it. It was a great performance by a full strength Cardiff side against a virtual All Black Test XV. Cardiff tackled hard and pressurised New Zealand’s half backs mercilessly, but we also missed chances and, in the second half, managed only two David Evans penalties and the ‘Blacks’ were back in the game. The result 15 points to 25 points is defeat, but still the best performance by any team against the All Blacks on their short Wales/Ireland tour.

Cardiff restored Welsh pride on that day and let us not forget that, for we are always highly critical in Wales and have short memories. Every Cardiff player played with pride and courage, none more than the skipper Timmy Crothers who led his team from the front with skill and enthusiasm.

Attempting to make Cardiff progressive by words and actions over the previous 18 months I could be forgiven for thinking, on that day, that perhaps we had at last turned the corner. In my report last year, I said that “Cardiff were consistently guilty of lack-lustre performances” and that “our players seemed to follow the game around rather than take part”. I also asked “whatever happened to the pride of playing for Cardiff and the Blue and Black spirit?”. It was all there on 14th October, 1989. But apart from three or four brief encounters with this standard of performance, notably against Llanelli in the Schweppes Cup on 27th January, 1990, 15 points to 4 points; Neath (away) in the cup on 24th February lost 6-22 points and a couple of game with Swansea where we could even say we were unluck.ly not to win, I think the story for the rest of the season was frankly hard to bear.

Everything that had suggested a promising season collapsed around us, especially in the last six weeks. Generally, we were hit by some diabolical injuries at crucial times and, never, after the All Blacks match, were we able to put anything like our best XV on the Park. Long term injuries to Mike Griffiths Howard Stone Tim Crothers, David Evans, Mike Hall, Mike Rayer and Geraint John were encumbering enough, but we also lost Andrew Booth to Cambridge University, Mark Edwards through glandular fever, David Young and Gerald Cordle to Rugby League and the irritating fact that our youngsters were not always able to step up when we needed them because of Welsh U-21 commitments.

Even when our new band of youngsters did step up they had to attempt to fill the boots of the experienced campaigners instead of learning the trade alongside them. In the absence of so many senior players it was too much to ask of the youngsters to take on Neath for example. But just wait until they play alongside Mark Ring, David Evans, Mike Hall, Howard Stone and Steve Ford.

We cannot argue with hard facts and our awful injury problems were facts. So too, our statistics do not lie. We lost 20 games in our worst season.

Following the All Blacks match the early season distinct. Improvements􀀷should have been maintained. It was not, but my prognostications that the third year, the year of leagues, will see Cardiff, ALL BEING WELL, finish favourably at the top end of the Premier League 1990-91 if l may be so bold!

At present Cardiff Rugby Club representatives in conjunction with Senior coach Alan Phillips are considering the probable appointment of a manager to the Cardiff are team. The full the portfolio laid down by the Club is likely to include responsibilities for engendering financial support for further development and progression improving communications, coordinating facts and ideas, recruitment and selection. At this point I think it is relevant to say that Alan and Peter have striven very hard to make a success of the debris left after injuries and illness took their toll this season and Terry Charles was always supportive of the coaching duo.

Alan Phillips, stalwart player that he was, has found out rapidly that unless you have quality players in key positions and the right structure of management – you will struggle.

I think the uphill battle is almost won and with Alan Phillips, the Team Manager and the players fit and well, I am positive that in a year from now the Chairman will write that the job has been done.

To divert to another important aspect of last season – again on the almost famous day on the field, 14th October. I had the great pleasure of inviting the Welsh Rugby Union President, Mr. Clive Rowlands, to open officially our 27 Executive Suites. It was a happy occasion with our many guests enjoying our hospitality. Whilst introducing Mr. Rowlands and thanking all those involved one man especially must be singled out for thanks-the one and only Mr. Albert Francis, lord and master of Executive Suites and Lottery etc. etc. Thank you Albert for everything! During my introductions on that day I remember saying that these facilities, the remarkable Executive Suites, had put us once again in the forefront of Welsh Rugby. The boys and Alan Phillips must now do their bit to match up to the attraction at the river end.

Congratulations to Steve Ford, our exciting wing, on his selection for Wales against Ireland and scoring a try on his debut. Well done Steve -one of our most consistent players throughout the season.

Congratulations also to Mark Ring, Mike Rayer, Mike Griffiths and Steve on their selection to tour Namibia with Wales in May 1990. Again David Evans and Mike Hall were unlucky not to tour through long term injuries.

My personal thanks go to all those Committee men who supported me throughout the season -indeed in the two years I have had the honour of being Chairman of our great Club. I thank Howard Norris, my Vice-Chairman who did a competent job, being particularly supportive throughout the two years at all those Whitbread Merit Table meetings where mostly things were hairy to say the least. In the latter stages I must also thank Alun Priday, Brian Mark and David Hayward for their support in this matter. Howard was unwell towards the end of this season and I wish him a speedy recovery.

In conclusion I will briefly report that in May I had the pleasure of managing the Cardiff Tour Party to the United States of America. The number of senior players participating was considerably reduced due to injury and the Welsh Tour which enabled the predominant!) younger element to come of age.

If these youngsters and this tour is anything to go by then our building and planning programme is bearing fruition already and our future at last looks brighter.

So “buck up” senior players – these classy, lively and superbly fit young players know what the honour of playing for Cardiff really means – just like old times!