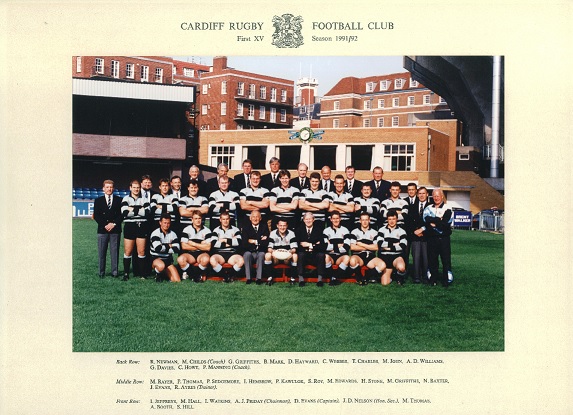 What is there to say about a Season that has seen the Club return one of the worst playing records in its history. I’ve heard words like disaster, disgraceful, disgusting and, of course, disappointing mentioned. Yes, I would agree with some of the sentiments expressed but not all, because if one is to really appreciate the good times, one has to experience the bad times. The Season that has just been completed was a bad time, a bad time for Players, Officials, Committeemen, Members and Supporters but I trust that we will all have learnt from it.

”When the going gets tough – the tough get going”

Who would have thought in August of last year that with nine players selected for the Welsh World Cup Squad we would have experienced a Season like we’ve had? Everyone I spoke with at the time realised that our results in September and October would be on the poor side owing to the absence of key players but we only had to wait for their return and then we would be winning again. What a false illusion that turned out to be. The reality was that in November the when our Welsh Squad players returned some were so drained from the experience that they could not find any sort of form, some had lost their zest while others returned injured and missed large chunks of the season.

To highlight this, take the predicament our Selectors had in early Season. They had two international players vying for the outside half position, Mark Ring and David Evans, a third international outside half, Adrian Davies was to join us later in the Season – no problem here then. In reality how many games in total did these talented players play for the First Fifteen? Well for those who do not want to look up the records, that I’ll tell you – 11. There cannot be another rugby club in the world that can boast of 3 full international outside halves on their books and yet we struggled all season all season in this extremely crucial position. I spotlight this because it symbolizes the frustration that many of us have felt throughout what has been a long hard winter.

It was after a particularly heavy defeat in the first Heineken Cup match at Swansea that we had the sad saga of the resignation of Alan Phillips as Club Coach. Having informed Members of the details of what happened in the Athletic Club’s Newsletter, I do not propose to repeat it in this report. I think it sufficient to say that whether or not Alan was the World’s best Coach, he deserved to leave the Club he served so loyally as a player and as a hard working coach in a much better manner.

Being something of a fatalist, I have accepted that sometimes in life one can see some good emerge from the depths of adversity and I now wonder if we needed a lot of what’s happened to make us take stock of things. The Committee accepted my outlook and following my suggestions appointed a sub-committee to review the coaching and administrative structure of the club, this sub-committee to seek outside professional guidance if it thought necessary. Not only do this but also sent representatives to other clubs to see what structure they had installed.

As with the parent body of Welsh Rugby and indeed our own Club’s Management Committee, it was considered necessary that we have a small Executive Committee which can meet on a regular basis and if thought necessary consult quickly to respond to any situation that might arise. Decisions will be made without delay and it will then report back to Main Committee to obtain endorsement of its actions. This Executive will be chosen by Committee immediately following the Annual General Meeting and it will then allocate specific duties to Committee Members, as well as at some future date consider any alteration that would seem necessary to the administration. It may recommend an alteration in the number of committeemen. However, at the present time, with representation being required on the Management Committee, the Finance and General Purposes, the House Committee, the Ground Committee, as well as the Rugby Section’s Finance and Sponsorship Sub committees not to mention the Association of Senior Clubs, the W.R. U.’s District B, The Snellings, Cardiff & District, both at senior and youth level Sub Committees, one can see that for amateurs giving their own time when holding down regular employment, the commitment is considerable.

One recommendation already acted on was that the Club appoint a Coaching Organiser to supervise all the club’s Coaches this ensuring that our players have the best possible assistance m this area. No stone was left unturned in our efforts to get the best man available, somebody with a pedigree and somebody without any preconceived ideas about the Club. We sought advice internationally and I am delighted to say that Alex Evans, who was responsible in no small measure for the success achieved in recent years by Australia, accepted the club’s invitation to be Coaching Organiser. I am sure that we will all give Alex and his wife, Kay, a warm and friendly welcome and hope he achieves his ambition of taking Cardiff back to the top of the League. Incidentally, I believe it was a good omen that, during Alex’s􀄂4½ days initial stay, he saw 4 games in which Cardiff sides were involved against Newport and Pontypool in the Heineken League, the Athletic XV versus Bridgend Sports and our very successful Youth side in the Esso Cup Final and all these games were won.