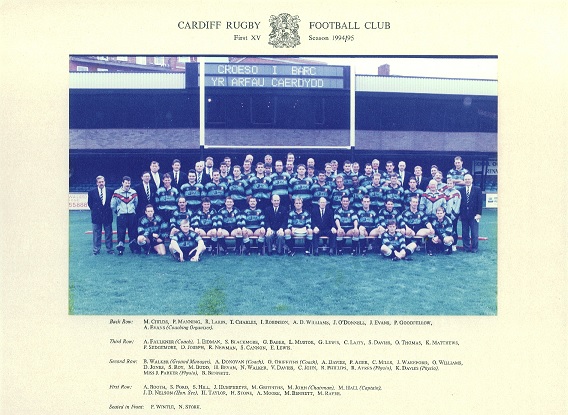 I was naturally delighted to be honoured by being asked to stand as Chairman for a third successive year. We had after all just concluded a reasonably successful season, culminating with victory in the SW ALEC Cup Final against Llanelli. We had largely the same team, certainly the same Captain and Coach, could we go one better and win the league? I was certainly very pleased to be part of what could prove to be one of the most momentous seasons as the changing future of Rugby Union began to unfold.

This was highlighted with the appointment as Chief Executive of Gareth Davies, a very successful Cardiff Rugby man on and off the field, who would surely benefit the Club, with the vast experience that he has gained in his professions. We saw the club office move to the Westgate Street end of the ground, and this meant that sensibly everybody was under the same roof Day to day decisions whether on rugby or commercial matters could now be taken much more quickly and efficiently.

Our preparation for the season commenced early in August, when we held a training camp in Jersey. Under the influence of Alex and his coaching team, and a keen on-looker Ian Woosnam, the rugby improved along with the golf “Woosie” incidentally has become a firm Cardiff fan.

This World Cup season began early at the end of August. After reaching the Final of the Worthington Sevens, we were off to a flying start, all be it after a shaky first half at home to Bridgend, as 47 second half points put us in better fettle. We then won away at Pontypridd and at home to Neath before going down to Swansea.

A disappointing crowd of barely 7,000 people then saw us beat a strong Llanelli side at the Arms Park before sadly we lost popular Mike Rayer for the season when we won narrowly at Treorchy. The response to a special lunch for Mike at the Marriott Hotel fully illustrated the respect and affection with which he is held both inside and outside the club.

Having played against the last South African team that visited Cardiff in 1969, it was certainly tremendous to have them back at the Arms Park after 25 years, but on this occasion we were perhaps unlucky to have met them first. Possibly we gave them too much respect, did we freeze a little on the day, we could so easily have won. It was sad to see such a small crowd at the National Stadium, but probably this will not happen again. In future and hopefully beginning with the Fijians this Autumn we will play tourists on our own ground. I am sure we all look forward to the atmosphere of a 14,000 full house at our Arms Park.

The season continued successfully and comfortable victories over Pontypool, Abertillery, Dunvant, Newbridge and Newport took us to the top of the table before, on December 19th we showed our full capabilities when we won 34-10 at Bridgend in difficult conditions. In my view this, along with the win at Llanelli on February 4th, were two of our best performances and very largely responsible for our ultimate title. It meant that the defeat at home by Pontypridd and away at Neath during the festive season could soon be forgotten. The Llanelli weekend was also memorable for the contribution made to the Stradey Park atmosphere by three coach loads of our Junior Blue and Blacks, whose support for the team throughout the season was thoroughly appreciated and who went on after Llanelli to have a very enjoyable weekend of rugby and fun in Broadhaven and Haverfordwest.

It was a pity that such an enjoyable season should have ended in anti-climax. In the SWALEC Cup, perhaps we had too easy a run through with Merthyr, Pyle, Old Penarthians and Aberavon, or was it the fact that we had not played a top team since that Llanelli game on February 4th? A defeat by a highly competitive Swansea side was a sad blow with our team for once below par. While our celebration day against Newport fell flat perhaps because we had earlier anticipated a Cup Final appearance.

Between the league and crucial Cup games there had also been the tremendously entertaining match with the popular Barbarians. Our regular Easter visitors always bring out the best in Cardiff rugby.

Not only were we Heineken League First Division Champions, we were also voted at an award ceremony in London, Whitbread British Team of the Year where it was good to hear the guest speaker Ian Robertson say “Rugby was far better for having Cardiff back at the top”. Mike Hall is to be congratulated for his leadership on and off the field and also for being appointed Captain of Wales in the World Cup, while the whole squad, in depth, deserve congratulations for their dedication, team spirit and fine performances throughout the season. I must give further praise to our coaching organiser Alex Evans and the coaching staff New recruit this season Ian Bremner joining Terry Holmes, Charlie Faulkner, Alun Donovan, Gwynnt: Griffiths and with Committee men Peter Manning and Bobby Newman successfully nurturing the Rags and under 21’s.

Alex Evans is also to be congratulated on being appointed Welsh Coach and it was a tribute to the club that eleven players-Mike Hall, Mark Bennett, Adrian Davies, Steve Ford, Mike Griffiths, Jonathan Humphreys, Derwyn Jones, Emyr Lewis, Andy Moore, Stuart Roy and Hemi Taylor made the squad to South Africa, Well done lads. While earlier, wingers Nigel Walker and Simon Hill, and full back Mike Rayer played for Wales during the Home International season and World Cup qualifying matches. At under 21 level, Jason Hewlett, Owain Thomas and Paul Beard were capped and you can read elsewhere about the honours gained by members of the all-conquering Cardiff Youth side. The future looks promising indeed.

Although success is measured by our performances on the field of play there are always many backroom boys who in one way or another play a vital part. To my Executive Committee, its thanks to John Evans, John Nelson, Ian Eidman and Terry Charles and to all the other Committee men and Vice Presidents who help in so many ways during the season. Thanks to Steve Cannon and his team, with Richard and Karl frontrunners, who successfully run the Junior Blue and Blacks. To Tina Tew in the Commercial Department and to her husband Chris who runs the Suite Catering. To Brian Walker and his ground staff, and to the old hand Jacquie and the long suffering office staff.

Jeff Ellerman and Betty continue to provide that special clubhouse atmosphere of food, drink and camaraderie. Our strong supporters club continue to assist in so many different ways and I would like to thank them for the Lottery work, operating the Souvenir Shop and for providing so many functions at the clubhouse.

In this physical game of rugby football we seem to see more attention being paid to the medical profession and we are very fortunate in having such a strong team. They must all be congratulated on their expertise and the swift attention that they pay lo both our players and our visitors. We have seen a new face running c 111 the field this year and I am pleased to welcome Jane Parker to our medical support team.

Many thanks to Duncan Gardiner our programme editor for writing and presenting a product which I believe is the equal in information and entertainment to any seen at Rugby Clubs throughout Great Britain. Our afternoon entertainment whatever the’ weather was once again splendidly provided by the young South Glamorgan Band. To our major sponsors, AT & T, who are continuing their association, and to all who have hospitality suites advertising boards who use our programme to advertise and those who provide match balls, you are a vital part of our continuing success.

The total face of Rugby Union is altering. Cardiff have for many years openly supported the idea of an Anglo-Welsh/European Competition. We now hope to be a part of such an organisation when it should start in season 95/96. This will give all our members the opportunity to see exciting matches against fully represented sides from clubs from other countries. We must always continue to provide an interesting representative fixture list, and we need new strong teams to provide entertainment at the Arms Park.

One other regular talking point in the later part of the season has been the future of our ground within a Cardiff Bay Development. Since the first approach from South Glamorgan County Council the Committee view has been simply that we must liaise with the W.R.U. and South Glamorgan Council and see what proposals they have to offer. While there have been quite a number of meetings to date we have not had firm proposals. As the situation stands at present my personal view without these full details, is that I cannot see any advantage in our moving from the City centre to the Bay. Yes, I would like to see 20,000 people in our stadium watching European Cup matches, but I feel we have the room to develop our own ground at the Cardiff Arms Park if the need arises. This is a personal view, it might not be a Committee view, but I can assure all members that any decision on moving away from our ground would not be a Committee decision. The membership of Cardiff Athletic Club will decide and, as the Rugby Section accounts for some 900/o of the membership it is here where the vote from Rugby members will decide the future.

Finally, I wish to extend my sincere appreciation to every Cardiff Rugby person who has made this a most enjoyable year that I will surely treasure for a very long time.