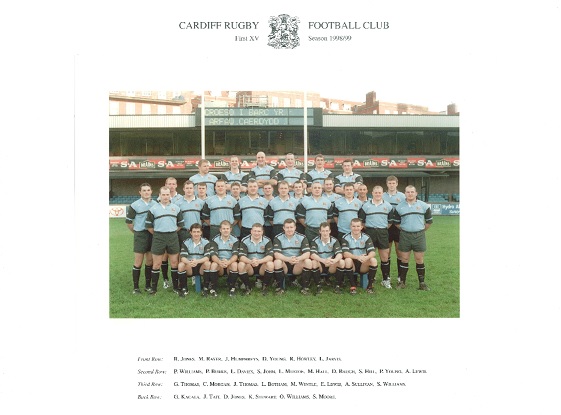 This season will be remembered historically for “The Rebels” (Cardiff & Swansea) joining the Allied Dunbar Clubs in England, albeit in friendly matches. There was a buzz of excitement and anticipation as large crowds turned up to support, convinced that we had made the right decision.

The season began very well with notable victories over Leicester 35pts – 20pts and Harlequins 27pts- 24, both away and indeed we only lost one of our first ten matches to very strong English opposition. During the latter stages of the season the visiting teams were weakened in their selection and the momentum waned accordingly. However, the supporters still managed to fill four coaches for our final game of the season at London Irish, and I pay tribute to the supporters Club under the Chairmanship of Ken Jones and his Committee members for their enthu­siasm and Loyalty during difficult times.

Peace has at last broken out with our Governing Body and it is time to look for­ward positively for the future and our negotiating Committee must be congratulat­ed for resolving complicated issues for the benefit of the game and for everyone concerned.

Our progress in the SWALEC Cup was a great disappointment and failure to reach the final was a major setback, and our image for the season had been tarnished.

I would like to thank the Coaching Staff, Terry Holmes, Anthony Faulkner, Mark Ring, Hemi Taylor and Huw Bevan together with the physiotherapists Jane James, Maggie Burcher, Wayne Mortimer, and Brian Hughes for their magnificent contributions this year. All are to be congratulated for giving maximum effort daily in order to achieve success. Likewise, Howard Stone, Gerry Roberts, Les Good David Williams and Sports trainer Billy Woods and physio Alan Thomas with the Youth and Junior teams.

Our medical staff are the envy of most professional teams and have been out­standing again this year, and I thank our team of Doctors, Jim Naysmith, Keith Young, Huw Evans, Richard Evans, Professor John Williams and Surgeons Brian Rees, John Fairclough, Roger Evans, and Mike Fardy. Optician Frank Maloney (Spec Savers) and Dentist Geoff Price for their contributions.

David Young has led the team with distinction and professional approach on and off the field has been evident throughout the season, always find­ing time for a chat with the sponsors, Committee and Supporters.

Our Youth XV had a very successful Jubilee Season and a number of their players performed well for the 1st XV namely, Rhys Williams, David Patterson, Sean Nelson, Phil Wheeler and Jamie Robinson. It is important that this development continues to bear fruit and I thank the Youth Committee under the Chairmanship of Jim O’Donnell, Mike Ryan, (Secretary) Neil O’Donnell (Fi Secretary) Colin Davies, Bill Woods and Weldon Davies are to be congratulated for their hard work and Loyalty to the Club.

Dewi Griffiths has entertained our visitors and supporters with authoritative confidence and has promised to learn all the players names by next season, including Bruiser’s. Well done Dewi!

The mid-season appointment of a press liaison officer Mr Alan Evans has further enhanced the promotion of the club. We wish Alan further success and hope everyone buys his & Duncan’s book.

Our programme editor Duncan Gardner never ceases to amaze with his production of our magnificent match programme with regular contribu­tions from J.E. Malcolm Thomas, David Hayward, and John Scott. Thank you all.

The Lottery continues to provide much needed income and I would like to thank Ken Jones, wife Kath, Roger Williams and Brian Bennett for organ­ising it so successfully over many years.

I thank Cardiff Rugby Football Club Ltd members under the Chairmanship of Peter Thomas, and the Management Committee of Cardiff Athletic Club through their Chairman Mervyn Warfield and President Haydn Wilkins (Mr Bleddyn Williams has subsequently replaced Mr. Wilkins as President following Haydn’s retirement Our thanks are due to Haydn for his many years of service with the Club) who has been very active throughout the year resolving difficult issues with the WRU once more prominent by their contributions and valuable advice on Rugby matters and special thanks to Peter Nyhan our Statistician.

Very often work on the field reflects work done off the field and I pay trib­ute to my hard working Committee members of Brian Bennett (Vice Chairman) J.D. Nelson (Secretary), Ian Eidman, Malcolm Childs, Peter Goodfellow, Robert Lakin, Robert Newman, Jim O’Donnell, Mervyn John, Ian Robinson, Terry Charles, Tony Williams and Steve Davies. Thank you most sincerely. Unfortunately, Mr. T Charles, Mr. Ian Eidman and Tony Williams are retiring at the end of the season and their valuable services will be most certainly be missed. I thank them for their contributions over the years and wish them well for the future.

Special thanks must go to all our sponsors and suite holders who are too numerous (exceeding 150) to mention individually. They have provided much needed income and support to the Club and long may it continue. The Capital Rugby Initiative scheme designed to attract youngsters who are Cardiff born, Cardiff bred to the club is progressing excellently thanks to the efforts of Phil Davies (Commercial Director ) Mark Ring, John Huw Williams, Selwyn Wyatt and the current squad members. The scheme also runs an under 12 team ably coached by Steve Hodnet and Eric Fry.

Our successful Cardiff under 13 team is also flourishing, thanks to Andy Morgan and Coaches Tim O’Donnel, Steve Dickens and Tony Vella.

One must not forget our Junior Blue & Blacks and the sterling work of Colin Hancock.

As the season drew to a close it was disclosed that many of the coaching squad and players were to have their contracts terminated and were to find pastures new. We wish them well for the future and hope they are suc­cessful with their new clubs. Mike Hall has decided to call it a day after having surgery to his knee and he leaves many happy memories of his commitment and skills at the Arms Park. Mike led the Club to the Cup in 1994, to the League title in 1995, played in the cup winning team in 1997 and in the European Cup Final against Toulouse, was capped 42 times by Wales and played for the British Lions in their winning series against Australia in 1987. We wish Mike the best of luck for the future.

Gareth Davies also severs his links with the Club after being involved with Cardiff for 17 years. Five as Chief Executive and 12 years as a player, to take up an appointment as Chairman of the Sports Council for Wales, Gareth has been at the core of development within the club and his expert­ise and devotion has been exceptional. We wish him well in his new posi­tion with the Sports Council.

We now look forward to the future, under the umbrella of the Governing Body and a successful run in the European Cup.

Finally, may I wish the New Management team the best of luck for next season and thank you all for your kind support during the year.