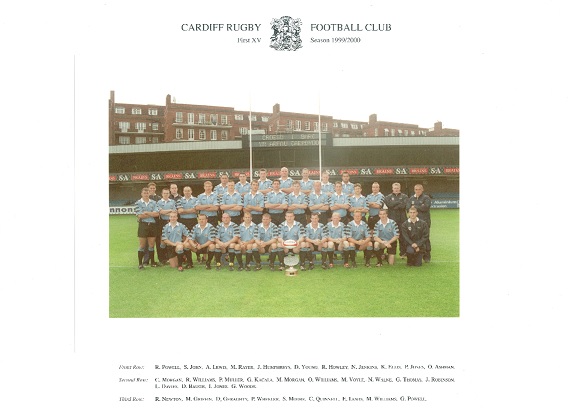 Cardiff Rugby Club decided to give its full support to the Scottish/Welsh League this season and we made no secret of the fact that we preferred a British League. In terms of regular rugby at the Arms Park the structured season was, to say the least, fragmented . Cardiff gave permission for the field to be used for heavy plant access in order for the Millennium Stadium to be completed in time for the World Cup. Returfing the pitch was therefore necessary and our first home game was played on November 19th against Harlequins in the European Cup.

The Limited Company recruited aggressively during the closed season and we were fortunate to gain the services of Neil Jenkins, Mike Voyle, Craig Quinnell, Ma1tyn Williams, Jamie Robinson, Nick Walne, Kevin Ellis, Bret Barrett, Grant Esterhuizen, Rhys Williams, Gary Powell, Martin Morgan, Ryan Powell and Phil Wheeler With nine of our players involved with World Cup Squad the start of the season was left to our other Squad Members to carry the flag for the Club. It is a credit to Mike Rayer (Vice Captain) and his young Squad that they only lost two games during this period. The great thing about their efforts was that the groundwork was done to launch a major assault on the silverware on offer, placing us in a favourable position to win the Scottish/Welsh League. David Young (Captain) and his fellow International players returned to continue the excellent work and to the delight of everyone at the Club, we managed to win the League with matches to spare. Well done,

Losing to Llanelli in the Quarter Final of the European Cup was a big disappointment as was los­ing our three year ground record to Swansea in the last match of the season.

We congratulate David Young on his appointment as Captain of Wales and the other eighteen members of the Squad who represented the Country at various levels during the season and wish them well for the future.

Rhys Williams deserves special praise for his inclusion in the Wales team against Ireland and his future looks assured. Simon Hill, Liam Botham and Leigh Davies are leaving for pastures new and we wish them well. Simon is currently enjoying his Testimonial Year after giving 10 years of valuable service to the Club.

Rhys Williams, Martyn Williams and Steve Moore are to be congratulated on gaining their 1st XV Caps, Spencer John on the most number of appearances (28) and Paul Burke as highest points scorer with 277 points.

Our Youth XV have excelled this year with silverware being plentiful. Mike Ryan (Youth Secretary) lists their achievements in his Youth Report and the Committee, under the Chairmanship of Jim O’Donnell, must be congratulated on their achievements. Their success is largely due to the excellent coaching of Howard Stone and Gerry Roberts and their back up team of voluntary helpers.

The Board of Directors, under the Chairmanship of Peter Thomas, continues to promote and develop CRFC as a Premier Club in Europe and are ably supported by the Management Committee of Cardiff Athletic Club. The Rugby Committee has worked hard again this year and 1 thank them for their loyalty and support.

After a long association with the Club both as a player and Committee-man, the sudden death of John Nelson (Hon. Secretary) was a great shock to us all. He was a most loyal and devoted servant of the Rugby Club and always emphasised the need to preserve high standards, both on and off the field. He is sadly missed by us all. It was at John Nelson’s funeral that news reached us of the death of another great man of Cardiff and a close friend of the Club, Rex Willis. His whole life was an adventure and he too will be missed by those who knew him.

The administrative staff, headed by David Jenkins (Chief Operating Officer) have worked tirelessly throughout the season and have been professional in their approach throughout. Brian Walker and his ground-staff have had a very difficult season due to the pitch replacement and we wish them well with their effo11s over the closed season. Vicky Holley and Jackie Flynn have continued to work closely with the Rugby Committee Members and my grateful thanks to them. Jeff Ellerman and Bar Staff continue to give valuable service and provide a homely and humor­ous atmosphere at the Clubhouse.

Special thanks must go to all our sponsors and Suite Holders who have provided much needed income and support to the Club and long may it continue.

Lottery income is also an important source of income and I would like to thank Mr. Ken Jones, wife, Kath, Roger Williams and Brian Bennett for their contribution over many years.

Shirley Withers and staff continue to run the Souvenir Shop with pride, giving a warm welcome to all visitors.

The Supporters Club, under the Chairmanship of Ken Jones and his loyal Committee Members has once again showed great enthusiasm and commitment to the Team as demonstrated by the coach-loads that journeyed to Harlequins for the European Cup match.

Alan Evans (Press/Media Officer) has again produced promotional literature of the highest quality and the rugby programme is a fine example of his work.

The Capital Rugby Initiative Scheme is progressing excellently, thanks to the efforts of John Huw Williams (Capital Rugby Director) and his staff for spreading the gospel of rugby football among the schools in Cardiff.

Good news for next season is that Cardiff RFC will operate Youth and Under 21 teams and supporters will be able to view matches on a weekly basis at the Arms Park. We can therefore look forward to the future with confidence.

Finally, may I wish you the best of luck for next season and thank you all for your loyalty and support during the year.