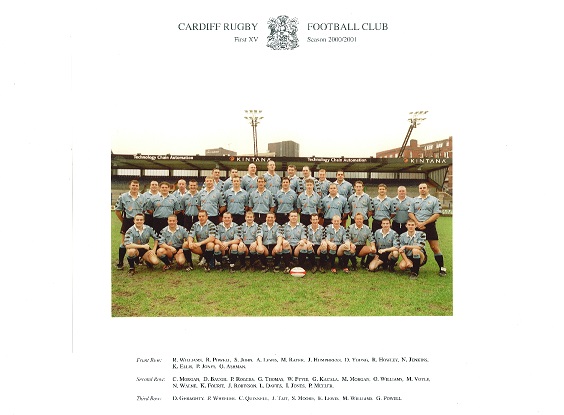 A season which can be described as a roller-coaster ride of highs and lows. The highs being superb back to back victories against Saracens and at home to Ulster in

the European Cup, victory at Bridgend and Newport in the Welsh/Scottish League and a resounding win at Llanelli in the Principality Cup. The lows being a disappointing European Cup exit at Gloucester and back to back League defeats against Bridgend and Ebbw Vale which ended our hopes of retaining the League title.

The season began with us revealing our new recruits, Paul Jones, Pieter Muller, Richard Newton and Matthew Griffin in the Jewson Challenge against a full strength Leicester which we won. Other players to join during the season included Kenneth Fourie, Wayne Fyvie and Peter Rogers as we continued to strengthen our squad. Five consecutive wins and a point defeat in Glasgow started us on the way to defending our League title and taking us into Europe.

A European Cup draw, which saw us, pitted against two previous winners, Ulster and Toulouse and many people’s pre-season favourites, Saracens, was always going to be a difficult task. A nervous defeat in Ulster and victory at home to Toulouse took us to Vicarage Road, Watford for what was to be a crunch game for the squad. The excellent victory and superb support, which followed the team that day, was one of the high points of the season. Home victories over Saracens and Ulster assure􀁧 a quarter-final place and a visit to France would decide our destiny. Defeat left us with a short trip across Offa’s Dyke to Gloucester. Our exit was one of the lows of the season and left us with a hangover in our next two League matches in which we were also defeated.

Our journey in the Principality Cup began at Bed was with a victory and a true cup atmosphere. Llanelli was our next port of call and another high of the season in an overwhelming victory against the Cup Kings. Reward was a trip to Swansea and this saw an end to our Cup sortie.

Returning to League action saw a number of victories before defeat at Llanelli, which resulted in us surrendering our League title. This brought us to our last game of the season against Caerphilly and one worthy of a mention. Whilst some experienced players embarked on their farewell games, many younger players began to get their careers off the ground. Many U.21 and Youth players appeared that night and the future of the Club is in safe hands with these young men.

The U.21s was a new venture this season and whilst the benefits of coaching and development was successful, the disjointed fixtures made it difficult for the fluency of the side. The coaches, Mike Rayer and Colin Hillman worked tirelessly with the players and continued their development.

The Youth XV have continued in an excellent vein this year under the Chairmanship of Jim O’Donnell. The hard work of the Committee and the excellent coaching of Howard Stone and Gerry Roberts has assured the squad have played to the highest standards. The Youth Report appears later.

The achievements of our players at International level continues and pride of place goes to our four Lions, Club Captain, David Young, Robert Howley, Neil Jenkins and Martyn Williams, who are rewarded for their hard work during the season. Congratulations also go to others who have achieved international recognition at various levels.

The Rugby Committee continues with its duties at all levels and my thanks go to all of them for the advice and support they have given to me. A special thanks to Brian Bennett, our hard working Hon. Secretary. Also to Vicky McCracken and Jackie Flynn for the valuable work which they undertake. The Management Committee, under the Chairmanship of Mervyn Warfield, continues with its support of the Rugby Section.