A SEASON OF UPS AND DOWNS 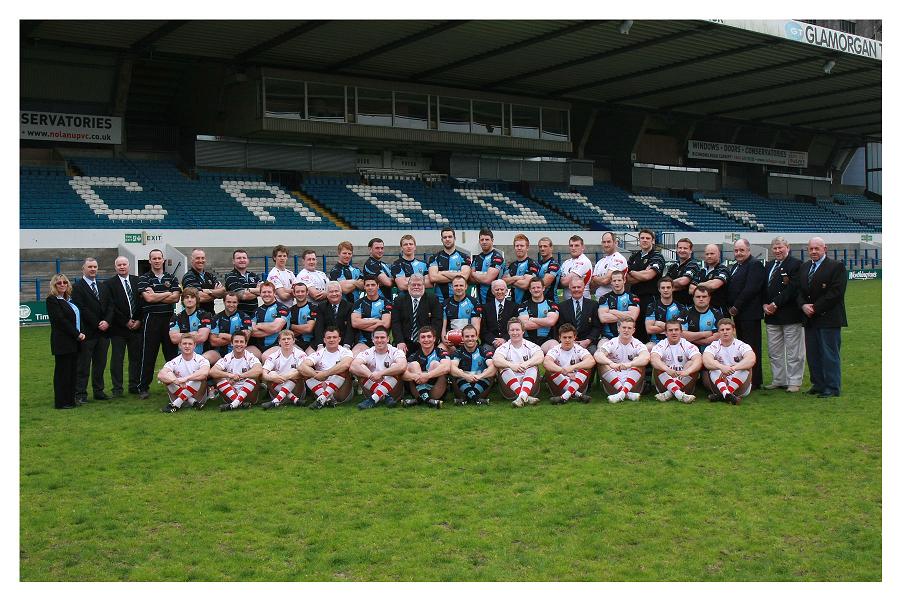 Grant Harrington was appointed captain for this the nineth season of Premiership rugby. Harrington, a former Pontypridd forward was to lead a young side. Cardiff used the Cardiff Blues academy to blood youngster who they see as having a bright future. His tenure as captain was to last only as long as his injury hit season lasted, several other captains being used while he was incapacitated.

The season proper started against Carmarthen Quins following several pre-season friendlies where the Blue & Blacks gave a glimpse of what was to come. In that Quins game, played at a sunlit Arms Park, memories of watching the Barbarians sides of old were brought back as Cardiff ran in eight tries in a 60 plus point hammering of the visitors. In the following game Cardiff were pushed all the way by a Cross Keys side that were to finish above the Blue & Blacks in the final table. Pandy Park is not a happy hunting ground for any side, but Cardiff won the day, hanging on to win by a point.

From there it went downhill, Cardiff lost five on the trot in the league. Four of these losses coming within one score, but the beating at Neath was especially hard to take as several ex-Cardiff players made significant contributions to the Welsh All Blacks cause. Things turned around at the most unlikely of places. Cardiff became the only side not to be beaten this season at Sardis Rd with a creditable 16-16 draw. That game set the tone for the next few games, and although not all were won, Swansea, who were at he time flying high in the table were dispatched at the Arms Park, and the following week’s score-line loss to Neath was a reflection of the effort that had been put in between the two games, Cardiff loosing by a single score.

December came and went with a mixed bag of results. A spirited win at Church Back Llandovery was followed by losses to the Keys and Llanelli. Christmas saw the traditional local derbies and Glamorgan Wanderers were sent back to Ely without a win. Fixtures were severely affected during the early part of the New Year as snow swept across the country. In fact Cardiff only played three games in January because of the weather, winning one and loosing to Bedwas and Aberavon at home.

February saw fortunes turn as the Blue & Blacks went undefeated. Two games were in the SWALEC cup, this season, as last, being only against sides from Division One of the league. Games against sides from lower leagues were always a highlight, not only for the lower league sides but also for the army of traveling support who follow Cardiff. This season’s cup games began in Beddau where a large crowd and a gale force wind were waiting. Playing into the wind Cardiff were behind at half time, but the steadying influence of former welsh international Lee Jarvis saw Cardiff cruise home in the second half, using the wind to great advantage. Next up was the rarest of animals, a home tie. Bridgend who were top of Division One West came to the Arms Park, but fitness and strength at the end of the game was always going to give the home side an advantage. As it was Cardiff ran out easy winners 30-20

March started with a tough friendly against North Wales RCG1404 followed by a week off. This gave the coaching team time to work on any issues in readiness for the visit of Newport two weeks later. It paid off. The ‘old enemy’ were ripped to shreds as Cardiff put together their most complete game of the season. Five tries to one wasn’t a reflection of the dominance they held over their near neighbors and had everything they tried come off it could well have been fifty plus points. As it was it was a record score against the Black & Ambers in the Premiership. Pontypridd came to the Arms Park and gained revenge for the early result, this was to start a five game loosing streak that included defeat in the SWALEC cup quarter-final against Aberavon who eventually went on to the final of the competition.

That loosing streak came to an end in the final game of the season at St Helens. In the spring sunshine Cardiff were second best for sixty minutes, but a burst of belief and with the right bounce of the ball three tries in the last four minutes saw Cardiff pinch the game in the last minute as Joe Griffin converted the final try for a two point win.

On the playing front several injuries to key players were picked up along the way. Ben Phillips broken his leg in training mid way through the season, Rhys James was airlifted to Swansea hospital after a game at Aberavon, a flight that did nothing to cure his fear of flying. As previously stated Grant Harrington missed several games due to a leg injury. On a positive note a large group of players were recongnised at Regional level. Tom Slater spent three months with the Blues where he showcased his talent. This was to lead to a contract across the water in Bristol. Outside halves Gareth Davies and Joe Griffin both filled in during the LV= cup, along with Steve Taylor, Nathan Trevett and Ian George.

Rhys Shellard, Gareth Davies and Alex Cuthbert were to also represent the club on the international sevens circuit, appearing in most of the eight tournaments around the world. But it was the youngsters who will be with Cardiff for a few years to come that gained the most international caps, Owen Williams, Thomas Young, Joe Griffin, Harry Robinson and Ieaun Davies all represented Wales at age grade level, Macauley Cook being appointed as Welsh under 20s captain for the six nations tournament.

Player statistics for the season