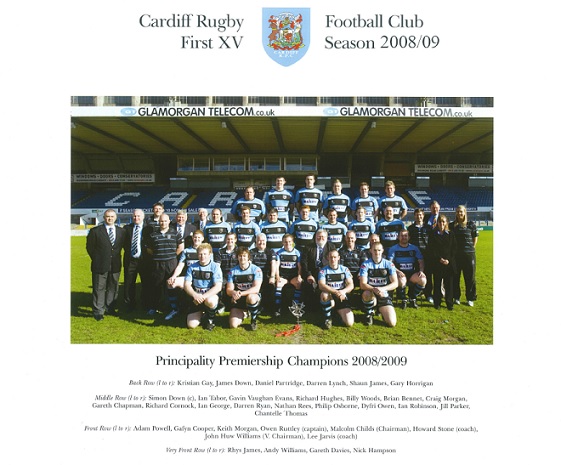 In the end the table didn’t lie as Cardiff romped to their first Principality Premiership title. It was all done and dusted by the time Pontypool came to the Arms park in the last game and it was satisfying that beating Pontypridd in the previous game put us in that position.

The season started with a long trip to Cornwall and a victory over Falmouth who quite simply were not in the same class as the Blue & Blacks. 12 tries shared by 10 players and a good run out, but a more enjoyable social evening was had. The following week a daunting trip to Coventry was arranged. Over 300 turned up to watch what was a great performance by Cardiff. Only two tires but a defensive effort that augured well for the season and a 14-7 victory.

The last friendly saw a trip to the Wern, Merthyr and a good workout in a 36-14 win. That brought high hope for the league start but those hopes were dashed at Rodney Parade where Cardiff were thumped, only one score in a 30-3 defeat was a good reflection of the game. A bonus point win against the Ravens the following week restored the balance but at Sardis Rd in the following game a ten minute spell where Ponty scored 21 points surrendered the game to them 32-28.

That sent a message to the side that they heeded for the remainder of the season. At Church Bank in the rain the Blue & Blacks fought to a 15-9 win with all the points coming from the boot. Gareth Davies 5 penalties to three by the Drovers. Against the Steelmen a week later the Blue & Blacks let the visitors get away to a three try start and despite a great comeback a bonus point was all that could manage.  Two good wins away at Neath and Swansea were followed by a home win over the Wanderers and Newport and Cardiff we vying for top spot.

Inevitably the opening of Parc-Y-Scarletts would coincide with a Llanelli win, but that was to be the last loss of the year. Pontypool Park has never been a happy hunting ground but a four try bonus point win was secured, Gareth Davies, Chris Czekaj, Roger Davies and Richard Cornock the scorers.

Rhys Shellard and Garry Horrigan scored twice in the win over Cross Keys before a trip to North Wales to Bethesda in the cup.  A fantastic welcome was received by the local who turned up to watch the home side start the game with a North Walian haka. On the pitch the Blue & Blacks won comfortably to progress to the next round. Back in the league and constancy in selection were helping build a good side. Bedwas were destroyed at Bridge Field 43-0. Six tries and no points conceded showed where Cardiff were in terms of the league – top.

The toughest game of the season on paper was next in the form of the arch enemy Newport. Five tries to two sent the Black & Ambers packing, Davies, Lee Jarvis, Czekaj and Howells scoring along with one for the pack in the shape of a penalty try. Two more wins at the Arms Park, one with a bonus point against the Wizards saw the Blue & Black starting to pull away at the top of the league.

The cup seemed to be going well as Narberth conceded 8 tries to the rampant Cardiff in a 53-15 win, but the Blue & blacks came unstuck at Parc-Y-Scarlets when even three tries in the final quarter weren’t enough to keep Cardiff in the competition.

But the league run in was coming to a conclusion and Cardiff could now concentrate on remaining top. Nine wins on the run ensured that happened. A last minute try won a tight game in Ebbw Vale and a week later another narrow win against Neath showed the grit in the side. Cross Keys and Bridgend away are normally difficult challenges but these were overcome with two comfortable wins before the double over Swansea and Bedwas was completed at home, both with bonus points. A vital bonus point win at the Wanderers was secured with a Damian Welch last minute try. That kept Cardiff just ahead of Newport and when Cardiff scored five tries against Llanelli only one win from the last three games would win the title.

The Pontypridd game that had been re-arranged saw a large crowd turn up to watch what was a great game of rugby. Cardiff secured the win – and the title- curtesy of three tries to two that sparked great celebrations on the Arms Park.

In the final two games Cardiff had little to play for. Pontypool came to try to survive in the Premiership and managed to dampen the Blue & Blacks title party, and the game against the Wizards tackling was optional in a Barbarian like game that ended 40-41 to Aberavon. That didn’t matter to the Blue & Blacks – the title was secured by a run of 15 league wins in a row. More of that next season and the defence of the title will be secured.