Alan Phillips is in the Hall Of Fame not because of his record number of appearances over 14 seasons or even because of his incredible try-scoring record as a hooker. It is more a recognition of his superb all round ability as a hooker, acknowledged by the Welsh selectors when he succeeded Bobby Windsor in the National team and the Lions,  and also his remarkable durability, as witnessed by his recall to a successful World Cup squad in 1987, five years after his international career had ended.

Alan was a whipper-snapper of a hooker, born to the position. ‘People talk these days about converted props and other forwards into hookers – France even tried it with a flanker a few years ago – but hookers can’t be manufactured like that. Playing a hooker is almost a vocation, a calling. You have to beaver away, get under people’s skins, and do the business in the tight and the loose’. Is his firm belief. And Alan himself was a natural number two, even though he will remind you he played the occasional game at centre for the club. 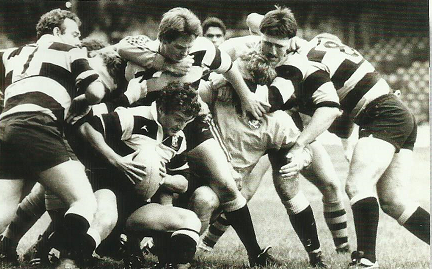 As befits one of the greatest characters of the Club he has a fund of stories, not all printable. One that is relates to how he was first recruited to the Blue & Black cause. ‘I had been playing for Cornelly youth in the Bridgend 7s and apparently one or two of the Cardiff officials had seen me and were impressed. Anyway a day or so later and I was walking down the road in Kenfig Hill following training when a car pulls up alongside me and a bloke who later turned out to be Cardiff hooker and Committee man Gary Davies wound down the window and asked me if I knew where Alan Phillips lived.  Feeling a bit knackered I said that if he gave me a lift I would show him exactly where Alan lived.  So he drives me up to my front door and rings the bell and asks my dad id Alan Phillips was in. I can still see his face as he told him I was standing behind him’

It was the start of a beautiful friendship between the Club and supreme Clubman. ‘I played for the Club from the age of 18 and a half to 36and it’s an achievement I am very proud of. My local club gave me the thumbs up because everybody acknowledge that to be asked to join Cardiff was an honour in itself. I did get the feeling that the team had been under-achieving but I also knew that I was joining a magnificent front row’ 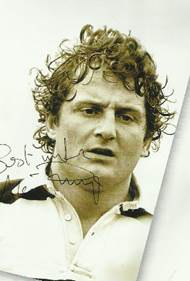 When he arrived Alan Phillips found Mike Knill at tight head prop and for him Mike was the best scrummager he ever played with.  Fellow new recruits Mark McJennet and Brynmor Williams settled in fast as they came under the wing of men like Malcom Collins, Alun Priday and Maldwyn James. ‘ They were strict but fair, and everyone was treated as equals’ Having made his debut in the centre against Paignton, he won his Athletic XV cap in 1973-74 and his First team cap the following year, by which time he had taken over from Gary Davies. ‘I was lucky enough to have had Gary as my mentor as he was one of the most respected hooker and clubmen I have ever encountered – even if he didn’t recognise me when we first met’

Alan also recognises the part played by Gerald Davies between 1975 and 1978  in setting new standards ‘Gerald was the best captain I ever played under, an inspiring player who was not a ranter and raver, and it was under him that our great team of later year began to take shape.’ Like some of his contemporaries and fellow Hall Of Famers Alan has no doubt that the teams between 1980 and 1986 were the best to have played over a sustained period.  ‘We had decision makers through the spine of the team and some of the best players I have come across in their positions. What can you say about a pack that had Whitefoot and Eidman at prop, Norster at lock and John Scott at number eight?’ He is also unflinching in his admiration for Bob Lakin, Paul Rees and of course Gareth Davies and Terry Holmes at half back ‘Sometimes I don’t think we get the credit for what we achieved in those years. We were a formidable team by any standards’

There was though no shortage of hard matches.  Pontypool was always a challenge and like so many Cardiff teams over the years even Alan Phillips and company found Bridgend hard to beat. Cup victories came and went and at the end of every season there was the unique challenge of the Barbarians. And Alan Phillips the captain really did regard them as a challenge that should not be taken lightly ‘ I was once asked to explain why in a so-called exhibition match I ordered Gareth Davies to kick at goal in the moments when we had already established a big lead. It was a clear decision as far as I was concerned: get three points and we would be the first Cardiff team to pass 50 points against the Baa-baas. In other words, more glory for Cardiff’

In short Whilst loyal to his Kenfig Hill roots, Alan Phillips is to this day Blue & Black through and through and for him being in the Hall of Fame is the greatest of all honours.