Alun Priday had his eyes on Cardiff from an early age ’My father brought with the Arms Park in 1945 and I saw Dr Glyn Jones scoring a try in the corner and from that moment I was hooked – it was always my ambition to play for the club and seeing the wonderful 1947-48 team in action made me even more determined.

The ambition and determination reached fruition by the time Alun was 22 years old as he won his first Athletic XV15 in 1951-52 and then his first XV cap for 20 games three seasons later. The real red letter day though was Easter Monday 1953 in his first game to the senior side against the Harlequins ‘I remember every moment of it’ he says proudly. We won 15-3 with Cliff Morgan, Hayden Morris CD Williams and Lloyd Williams scoring tries – it was a great day in my rugby life’ Before the end of that season he got another game against Cheltenham and then 12 more the following year before establishing himself as a regular in 1954/55 ‘I wasn’t at that stage doing much goal-kicking because Ken Richards, Gwyn Rowlands and Sid Judd shared the duty when John Llewellyn wasn’t playing but I was just happy to be in the team’

One of Alun Priday’s greatest moments of his entire playing career comes in fact from those early days when, he insists, the team performed in a way represented all that was best about team spirit. ‘There was a Welsh trial match in Llanelli and eight of our first-team regulars including Cliff, Rex, Bleddyn, Gareth Griffiths and Gordon Wells, almost an entire back division, were involved in it. But that didn’t stop is going to Twickenham and beating the mighty Quins.  I soon realised that men like Peter Nyhan, Howard Nichols, Malcolm Collins and Eddie Thomas were the backbone of the club.

Alun was recognised as one the most reliable last lines of defence in Welsh rugby ideally suited to catching and kicking role that was typical of the 1950s. As a safe pair of the proverbial houses under the highball, his trademark low, spiralling kicks to touch always kept his team going forward. He was soon attracting attention of the national selectors in both England and Wales. ‘I was invited to attend an English International trial in Bristol in December 1956 but opted instead for in Swansea the following week and then played in the portables in the final trial of January 1957’ he remembers. He eventually won his first cap in Ireland following year and then another 1961. He was unfortunate in that his peak years coincided with the career of the brilliant Llanelli and Lions full-back Terry Davies, but no one doubted that Alun was himself a player of true class. 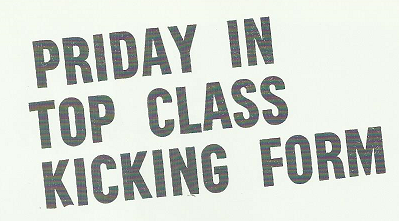 ‘To play week in week out for Cardiff was the nearest thing you get to International rugby at time and you could only have to think of the four games each year with Newport, or the annual glamour match with the Barbarians and of course the big touring teams every three or four years to realise just how challenging it was’ he says ‘Have no doubt about it, my aim was to be in peak condition for the games in Newport home or away. Sometimes we won, sometimes we lost but we always knew we’d been in a game.

Alun is unnecessarily modest about his own part in the three titanic struggles against the great touring teams in 1957 and 1963. First of all, he shared in a great win over the Wallabies which was to set him on his way to his cap in Ireland three months later. And then he played, however unwittingly, a central role in the tough game against Avril Malan’s Springboks in 1960. 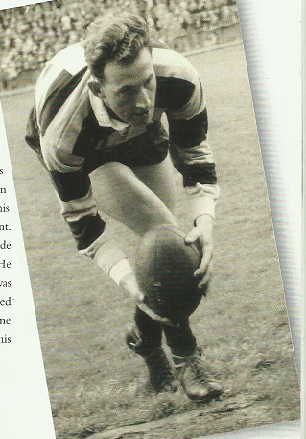 ‘What a game that was. We went into it unbeaten in 13 matches and there was a crowd of 50,000 packed into the Arms Park. After about 10 minutes I caught a highball under the old North Stand and send it back into touch, but as I turned to walk back to my position I was hit by an almighty tackle and laid out….. the rest I can’t remember’ he readily admits. In fact, he been late tackled by Springbok left-wing Mannetjies Roux, described by more than one watcher as a ‘guided missile’ and has very little recognition of what happened to the rest of the first half. After that the game deteriorated into a brawl and Cardiff, reduced to 14 men when fly-half Tommy McCarthy went off with a dislocated elbow, held on bravely for a 13 nil defeat. At the end Alun Priday told the press ‘Every tooth in my head is loose and I don’t know which leg to walk on’

Agony of another kind was to follow in his next game against a touring team in 1963. Another capacity crowd saw the All Blacks taken to the wire thanks to mighty effort by Cardiff pack who created the only try of the game for No.8 Cliff Howe but were pipped by a penalty and a dropped goal. Alun Priday converted Howe’s try but is still hard on himself for missing two or three medium-range kicks that might have won the game. But no one else would agree with him as his general play that day was again magnificent.

Alun Priday played his final game, his 410th for Cardiff, on 29 September 1965 at Bridgend when his jaw was broken in a controversial incident. Appropriately his last touch was as he made the bravest catches under pressure. He took his leave from the playing field but was soon back at the Club as a much respected committeeman and then Secretary. No one has any doubts that he is worthy of his introduction into the club’s Hall of Fame.