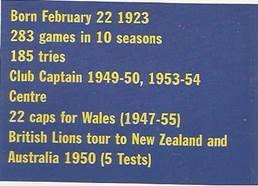 Bleddyn Llewellyn Williams knew from his days as a schoolboy rugby player in Taff’s Well that Cardiff was the only club for him. His elder brothers Gwyn and Brinley had preceded him in Blue & Black colours before the war and, as the whole world of rugby now knows, five more of the remarkable Williams fraternity – Lloyd, Vaughan, Cennydd, Elwyn and Tony – would one day follow in his footsteps. But in the ten years from 1945it was Bleddyn who achieved his life-long ambition of playing for the club and then became the unchallenged Price of Centres.

‘As things turned out it was a natural progression for me’ remembered Bleddyn ‘I played for Cardiff in the Dewar Shield and then for Wales Schools at full back, which was a bit of a shock to the system to say the least, then went off to Rydal School and captained the Anglo-Welsh Public Schools against the Welsh Secondary Schools at the Arms Park. I’d also had a game for the Rags at Ebbw Vale and a Cardiff XV at Chepstow, with Lyn Williams at fly-half and Wilf Wooller at centre, so I kept in touch with the Club during the war’.

In fact by 1945 Bleddyn Williams had already experienced a wide range of rugby for Wales in the Service Internationals and for the Barbarians, the RAF and even the Great Brittan team that took on the impressively titled ‘Dominions XV’ at Leicester in the closing months of the war. So it was no surprise when he saw out his service days at ST Athan that he found himself at the Arms Park and part of the Jack Matthews’ Cardiff team of 1945-46.

‘Yes, Jack and I soon hit it off and, yes, we enjoyed playing together. We had done so before, for an East Wales team that played the British Army in 1943, but now we were playing week in, week out, and were just two parts of what was to become a complete club team.’

The 1947-48 season was to be celebrated one for the team and the individual. Under Hadyn Tanner’s inspirational leadership only two games were lost – at Pontypool in September and Penarth in March.  Not that Bleddyn was one to worry too much about unbeaten records. Years later he was to write: ‘Invincible records are generally a bad thing, for in pursuing a policy of maintaining an unbeaten record a team is inclined to pursue negative tactics.’  No one accused Bleddyn Williams or any of the teams under his influence of being negative. Throughout the season of 39 wins and 182 tries with a free spirit and a range of ball-handling and running skills rarely seen over such a prolonged period. The culmination was in the final home game against Gloucester on April 28th 1948, with the team running in nine tries including four to Bleddyn, giving a record total for the season of 41. It was an individual achievement that was to remain unsurpassed for nearly 50 years. 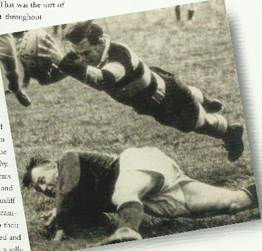 The highlight of Bleddyn Williams’ two periods of captaincy, and arguably the Clubs greatest day, was the defeat of the All Blacks in 1953. Considering the dearth of newsreel film, the opening 20 minutes of the game on November 21st 1953 continues to a remarkable place in the memories of those who were there and in the imaginations of those who were not. It is now folklore that Bleddyn instructed his team to run at every opportunity, even from the deepest defence. Thus after six minutes Cliff Morgan broke from the scrum in his own 25 with the captain’s words still ringing in his head: ‘We have got to try things…if we fail, we fail, but we have got to be different’. And different it was as Gwyn Rowlands cross-kicked and Sid Judd gathered to score at the Westgate ST posts. Different, again, when within minutes Bleddyn carried on another audacious Morgan break-out from defence and this time Rowlands keeps the ball and touches down himself in the right corner. 8-3 was the score-line and the historic final score and the messages of congratulations poured in from all over the world. Four weeks later and Bleddyn did it again as he led Wales to a 13-8 victory over New Zealand at the Arms Park, No one has repeated the feat in the long years since.

For Bleddyn Williams, though, Cardiff Rugby Club was not just about the glory. ‘It is a special club because it sets standards, particularly personal ones. I was so lucky in my playing days because everywhere I turned I had role models. Off the field there were Hubert Johnson and Brice Jenkins, Les Spence and SC Cravos, Gwyn Porter and Arthur Cornish. On it just think of the forwards we had from Les Mansfield, Maildwyn James and Gwyn Evans in the early days to John Nelson and CD Williams.  And then there was Bowes! Stan could play tight and loose head and because of that, was a reserve on stand-by 19 times in one season. That was the sort of loyalty that was evident throughout the Club.’

The greatest role model and setter of standards, of course, was Bleddyn Williams himself.  By the time of his retirement in the spring of 1955 he had long since been established as one of the legends of Cardiff Rugby. His final match was against Llanelli and at the end, another Cardiff victory secured, his team mates hoisted him on their shoulders, and the band played and the crowd sand, ‘For he’s a jolly good fellow.’