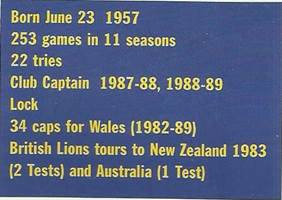 Bob Norster was as good a line-out leaper as the game of rugby had seen before the law changes. In an age when the jumpers came increasingly to rely on the lifting and support of others he was a throwback to an earlier age, asking nothing more than a bit of space to operate in and a hooker who could throw the ball in accurately. At International level he was unfortunate that his first cap coincided with Cardiff team mate Alan Phillip’s last appearance for five years. ‘Bob liked my throwing in’, says Phillips. ‘but the trouble was I’d get the first eight spot on and if I then ‘missed him’ with the ninth I would get earache about it for days – seriously, though, he really was the best in the business’. 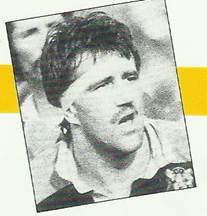 At International level Bob Norster had absolutely in dominating any opponent he came up against as successive England locks like Nigel Redman, Steve Bainbridge and particularly Wade Dooley learnt to their cost.  At six foot five inches he was by no means the biggest lock around, but his natural ability and timing helped him to reign supreme. AT club level his regular supply of ball was taken for granted from the moment he joined Cardiff.

‘After school in Nantyglo I played for Abertillery youth and senior level and was invited to join the Wales squad in 1977. This was a great honour for me and set me thinking about what I hoped to achieve in rugby. Pontypool and Newport had shown in interest in me but, thanks to Malcolm Collins, I came to Cardiff in September 1978. I was barely 21 and there was a lot to be impressed by.  What struck me immediately was that the club was so cosmopolitan.  We had Michel van de Loos, a Dutchman and Hans de Goode, a French Canadian second row. The captain was an Englishman, Barry Nelmes and Mike Teague and John Scott were as well. Even our vice-captain, a certain Gareth Davies, was known as ‘Majid’!’ 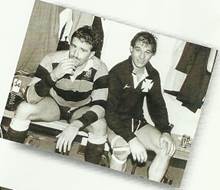 It was less of a culture shock that Bob Norster perhaps pretends, for he has always been one to balance his sporting commitments with the wider world outside. A graduate of Cardiff University, he was always keen to accommodate his rugby within his wider professional career. ‘I loved the attention to detail that was evident in the Club. Our kit was personalised and expectations were set. These were lessons that I tried to follow throughout my career in management in the years since’. 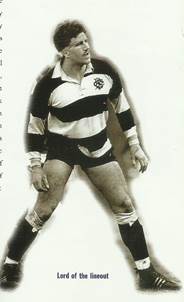 Of course as in any rugby team matters could not be allowed to be taken too seriously all the time. Much fun was had with the Lane brothers, Roger and Stuart, also products of the Gwent valleys, with Mike Murphy and Carl Smith, and with fellow lock, ‘Heavy Kev’ Edwards. Then there was Mike Knill’ says Bo, joining a long line of admirers of the redoubtable tight-head. ‘He was seemingly cuboid In shape and packing behind him was like pushing behind a sofa. For me he was a father-figure in the team and one for whom I had the greatest admiration’.

Bob has clear memories of special games and performances, like the one against Western Province in Newlands in 1979 when he came up against the great Springbok Mourne de Plessis, or the tour of Zimbabwe two years later which he felt reflected a great unity of purpose by all involved and which confirmed the team’s development at the time. ‘These were all staging posts in the emergence of the great Club team of the early Eighties, one I was proud to be part of’. 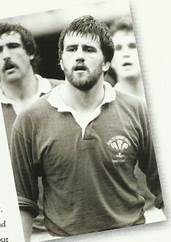 Bob Norster was another part of the celebrated spine of the team stretching from Alan Phillips and himself to John Scott in the back row and the Davies _ Holmes axis behind. ‘I won’t easily forget displays like the 24-3 cup semi-final defeat of Pontypool at Newport. They were the cup favourites and had thrashed us a couple of weeks before, but that was the day when all our years of preparation bore fruit. Kevin Edwards was magnificent alongside me and with Owen Golding, Scottie and Gareth Roberts forming a terrific back row, Gareth and Terry had a field day at half-back’.

Though Cardiff were to lose the final in the infamous injury-time dropped goal by Gary Pearce Cardiff were unquestionably the cup kings of the Eighties as much as Robert Norster was the Lord of the Lineout. Dark days like the controversial sending off against South Wales Police, courtesy of a disagreement with international rival Steve Sutton, or dark mysteries like the missing kit on tour in Thailand – yes Thailand – are soon forgotten in the big picture. Bob was always one to keep things in perspective and to see the wider scheme of things. But he’s sure of one thing: for him, entry in to the Hall Of Fame is right up there with his greatest achievements inside and outside the game. 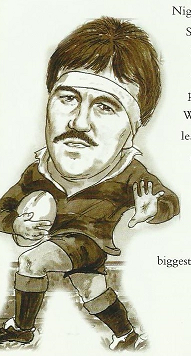