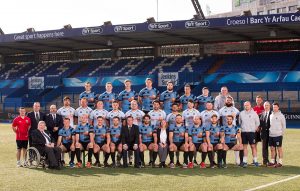 Cardiff’s second season in the re-vamped Principality Premiership saw them move up one place to eight overall.

It started really well. A narrow win in a pre-season game against Carmarthen was followed by an emphatic win over old rivals Newport at Rodney Parade included a hat-trick from Pat Lewis. A fantastic defensive effort saw the Blue & Blacks beat Champions Merthyr. Lewis again on the score sheet.

At Bargoed the week after Cardiff struggled to beat the Bulls but came through thanks to a late try by Jack Roberts. Back at the Arms Park Cardiff gained a bonus point win against Cross Keys. This week’s hat-trick hero being Will Rees-Hole. The first defeat of the season came at home to Ebbw Vale and that started a run of three consecutive defeats including a disappointing loss at Bedwas.

The wheels were put back on the wagon against Newport at the Arms Park in late October with a four try 37-22 victory. From there the season was a bit start stop. A loss at Merthyr was followed by a win over Bargoed and a loss at Pandy Park. A well fought victory at Eugene Cross Park where Cardiff came from behind to snatch a 23-21 victory. Two tries, one each from Ian Jenkins and Corey Howells seeing the Blue & Blacks home. The final three games in the East section was disappointing, three losses seeing the Blue & Blacks end in fourth place.

January saw two cup matches, the first a victory in the dying minutes at the Gnoll. Gareth Thompson kicking a last-minute penalty for a 15-13 victory. A defeat by Merthyr at the Arms Park saw the end of the Cup run but when the two leagues came back together Cardiff started with a victory over Bridgend. But another defeat by Merthyr and one by Llandovery saw Cardiff slip down the table. The end of February started a run of five games undefeated. Four tries against Neath including a brace by Rory Pitman started the run. The best two games of the season followed. A Barbarian style game saw a 53-25 win over Swansea. That was followed by a near perfect performance to the in-form team in the League – Carmarthen. Dan Fish, Kieron Brown, Adam Jones and Gareth Thompson all scoring at a freezing Carmarthen Park in a 34-10 win.

Two further wins, over Aberavon and Bargoed pushed Cardiff up the table. But when the Blue & Blacks went in-front of the TV cameras they seemed to suffer stage fright as RGC ran riot in a 64-21 loss. Another loss at Bedwas and one at Cross Keys further dented Cardiff’s league prospects. A win over Llanelli was only a stop gap as the last two games ended in defeat and 8th place overall.

Cardiff will look forward to a much-improved season next time out. Head Coach Steve Law looking to propel the Blue & Blacks much further up the table.