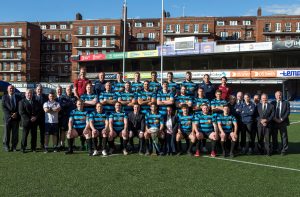 The 2018/19 season will be remembered as the season that Cardiff won the Nation Cup for the first time in over 20 years. But it was so much more than that.

Second place in the Premiership – the highest since the league winning season on 2008/09 was just reward for the efforts in the league. Merthyr were Champions for the third season, but Cardiff pushed them all the way. Two hiccups in the season seeing them miss out on the title by 6 points. But a trophy in the cabinet is always a great way to conclude a season, much more on the Cup later.

The season started in August at home to Old Albanians, the Blue & Blacks running in seven tries and showing some expansive rugby that was to become a feature later in the season. A week later at a sunny Tata Steel RFC ground where 59 points were scored, but 22 conceded as the team gave the coaching staff something to work on. And with Gethin Jenkins coming in to help in that aspect defence was going to become a feature all the way through the season.

Head Coach Steve Law picked a strong first team against Merthyr and he nearly saw his charges topple the defending Champions, only a last minute try seeing the game slip away. At Llandovery a week later in the rain Cardiff really didn’t turn up. The condition being played better by the home side in a 20-3 defeat for the visitors. A week later and the old enemy Newport were in town and if anything inspires the Blue & Blacks it’s the Black and Amber shirt. Cardiff shot to a lead and gained a bonus point after 4 tries. 14 points from Gareth Thompson seemed to be enough but Newport forced Cardiff to defend for their lives and hold on to a 29-27 first victory of the season.

But all the hard work was undone the following week where despite having all the ball for the last fifteen minutes Cardiff couldn’t find the try that would have given them victory. From there the season went for good to great. Bargoed and Cross Keys were defeated at the Arms Park, both with bonus point wins. Will Rees-Hole grabbed a brace against Bargoed. Club Captain Joey Tomlinson went one better with a hat-trick against Cross Keys, all from catch and drives.

Cardiff’s first outing on television was at a wet and windy Bridge Field. In a game that was spoilt by the rain Cardiff again showed their defensive qualities as they held of Bedwas in a 16-10 win. Llanelli were put to the sword an eight tries were shared by eight players in a 52-41 win that wasn’t a close as the score-line suggest. Cardiff did have to come from behind though having forgotten how to tackle in the first 20 minutes. At Aberavon a new name was being mentioned amongst the Cardiff faithful, Ben Thomas a young star showing his worth with a brace. Another rising star Ioan Davies also showing his ability too. Morgan Allen, who was later to become one of Cardiff’s main scorers grabbed a try after coming off the bench. He replaced Rory Pitman whose performances in Blue & Black had got him noticed. Eventually he went to play on a professional contract with Doncaster with Cardiff’s blessing.

The Blue & Blacks gained revenge for their TV defeat to RGC the season before as they won a pulsating game at the Arms Park. Will Rees-Hole scoring one of the tries of the season. The Blue & Blacks were making great strides up the table and when Bridgend were shut out at the Brewery Field thinks were looking promising. During the week of that game the Blue & Blacks signed Edd Howley and Scott Gibson from Neath. The Welsh All Blacks hitting financial troubles that left them routed to the bottom of the table and eventually relegated. Howley showed what we already knew he was capable of with a monster penalty from within his own half. Cardiff had also played Oxford University that week, narrowly losing out with a very much experimental team.

Nine tries against Neath at the Gnoll showed the trouble that the Welsh All Blacks were in, Howley scoring his first of 19 tries in that game. Three tries in yet another TV game accounted for a Swansea side that were improving since their early season reverses and the Blue & Black supporters were beginning to forget what defeat felt like. That feeling was to return though as although controlling the game for 60 minutes Ebbw Vale landed a last minute drop goal to inflict defeat on Cardiff for the first time in nine games. The wheels though were put back on the wagon the following week. A trip to the Wern normally results in a home win, except when the Blue & Blacks defend for their lives and take every opportunity and score when presented. 5 tries, two for Howley, one each for Thomas, Tomlinson and Max Llewellyn giving Cardiff a bonus point win.

The last game of the year saw a great game at the Arms Park. Llandovery and Cardiff playing out a 32- all draw that had eight tries ( four each) and saw another last minute drop goal affect the result, this time the Drovers kicking themselves level in the last minute. 2019 started with what most Cardiff supporters want, a win over Pontypridd. This one was the first for nearly ten years, but was one to savour. Four tries to tow and 19 points for Thompson started the year with a 34-15 win.

January also saw the start of the National Cup. Cardiff were drawn against Tat Steel and the Blue & Blacks were once again given a special welcome as the recorded a 73-43 win. Defending though seemed to be optional as Tata scored six tries. Cardiff though score 11 including braces for Rees-Hole and Howley and 23 points from Steffan Jones.

The league returned with a double over Newport, again with a bonus point. Martin Roberts and Thompson with two each and one by Morgan Allen recording the five tries. Revenge was gained over the Quins, but not until Cardiff had once again give their opponents a head start. Eventually a penalty try was to give Cardiff a bonus point win.

The last game of the month saw action back in the National Cup and a tough trip to North Wales. RGC had been a form team and Cardiff had never won at Parc Eirias, but with the wind in their faces they took the game to the Goggs. Tomlinson and Adam Jones giving Cardiff a first half lead, and when the second half started with rain coming into the home team faces the Blue & Blacks did exactly what was required and made them play from deep. Mistakes had to happen and Cardiff capitalised, Llewellyn and Llywarch Ap Myrddin scoring to seal their place in the next round.

Back in the league Cardiff were sitting in second place and were the form team. A Friday night game at Cross Keys was switched from a waterlogged Pandy Park to Ystrad Mynach’s artificial pith but the result was the same with a Blue & Black win. Five tries the following week against Bedwas included another brace from Thomas.

March saw the Blue & Blacks unbeaten for the third month in a row. Two tough games at the start were won by the defensive effort. At Llanelli, with the home side fighting for their survival, Cardiff held on for a 23-19 win. At home a week later the Wizards threw the kitchen sink at Cardiff but the Blue & Black saw the game through 26-20. Has Aberavon had a kicker the result may have been different as four tries went unconverted in a 26-20 win for Cardiff. Six tries against the Ravens at the Arms Park in the other league game in March saw Cardiff consolidate second place and even at one point sit top of the table for 24 hours. In that Ravens game the tries were shared by six different players. Howley with 12 points to complete the 39-30 win.

The other game in March was the Cup quarter final against Bedwas. Another six tries saw the Blue & Blacks safely through. Morgan Allen, Joe Gatt, Will Rees-Hole, Joey Tomlinson and a brace from Ian Jenkins securing a 43-12 win. That set up a semi-final clash with the Drovers in early April. On a sunny day at the Gnoll Cardiff were simply too good for Llandovery. Joey Tomlinson led the side out on his 100th appearance and shortly after Cardiff were ahead. Howley linking with Ben Thomas to score. And the Blue & Blacks were not in the mood to let Llandovery into the game, shutting down their attacking threat. Four more tries followed, Howley again, Morgan Allen, Joey Tomlinson and an interception try in the last second by Thompson started the celebration of reaching the final with a 35-17 win.

The league in April wasn’t what the Blue & Blacks would have wanted. At St Helens the Whites seemed to want the win more than Cardiff, Swansea winning 20-17 but the visitors will know they should have won. At Sardis Rd the following week Pontypridd got revenge for the defeat earlier in the season. Cardiff stared really well and were two tries up very quickly. But indiscipline cost and four tries by Ponty gave them a 28-19 win.

That left the Cup Final. Merthyr had made it through have beat Pontypool in the semi-final. On a sunny afternoon at the Principality Stadium the Ironmen were out of the blocks early and had score twice in the first twenty minutes. Thompson landed a penalty to get the Blue & Blacks going and when Tom Daley scored the game was set up for a fantastic second half. Cardiff took control of the first fifteen minutes of it and two superb tries gave them the advantage. Howley and Thomas the scorers. Merthyr threw everything at Cardiff for the rest of the game. They got one try back, but the defensive effort showed how much Cardiff wanted to win. Win seconds left the ball was dropped by Merthyr and from the scrum Thompson happily blasted the ball into the stand. The celebrations started and skipper Joey Thompson went up to lift the trophy with the cheers from the stand ringing in his ears. Twenty-two years since they had last won it Cardiff were National Cup winners.

There was still a league title to be decided though and with re-arranged games still to be played Cardiff had four games to play. At home to Ebbw Vale the Blue & Black recorded a record victory over the Steelmen. Nine tries – Macauley Cook, Tom Daley, Aled Cockwell (2) Matthew Powell (2), Joe Gatt, Edd Howley, Dan Fish (2) and Morgan Griffiths the scorers in a 75-17 win. The following Wednesday and another record score 74-7 against Neath. A Howley hat-trick with two from Cockwell and Griffiths amongst the twelve tries. But on the Friday night Merthyr secured the title leaving the Blue & Blacks to fight for second place. At Bargoed a bonus point win – with four more Howley tries – all but secured that, and a bonus point in the defeat at RGC confirmed the final table place.

Neath, Cross Keys, Bargoed and Bedwas were relegated. Llanelli secured their Premiership place for next season by beating Pontypool in the play-off.