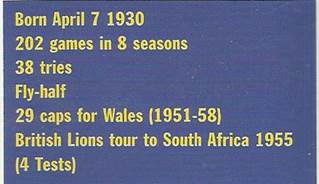 Larger-than-life is an over-used phrase, so is charismatic character and so for that matter are the adjectives ‘brilliant, inspirational and incompatible when applied to so many sportswomen men and women. Yet they were all appropriate for Clifford Isaac Morgan. From the moment he played for Wales a month before his 21st birthday through his great days with the Lions in South Africa in 1955, to early retirement at the age of 28 three years later he really was a superstar the game. But the Cardiff club was the base and security from which he built his rugby empire.

“To an 18-year-old schoolboy Cardiff stood out as the best club in the whole wide world. Not just because its playing achievements, but because of what represented. It had standards and it had class. Yes, Cardiff was the team that every club in the world wanted to beat but, more than that, when I think of the sheer class of the players like Bleddyn and Jack and Rex my spine still tingles” is how Cliff regards the club 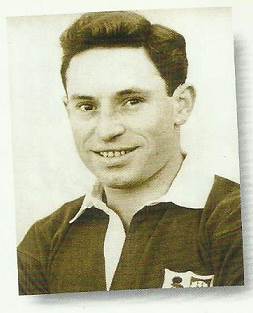 And of course is exactly how all those privileged to see Cliff Morgan play or to meet him or just to listen to the years since regard, Cliff himself. Everywhere he went in the world he represented the best of Cardiff rugby and for everything he did the club in turn was delighted to be identified with him.

At Tonyrefail Grammar school his gym teacher was Les Hayward, a prop forward who had himself played 19 games for the club, and it was he who brought the young fly-half the Arms Park. He had already played for Welsh secondary schools and within two years was to play for Wales opposite is great Irish hero Jack Kyle. But not before he had served his apprenticeship with the Rags and then the first team of Cardiff. “My first game was at Cambridge University with Jack Matthews and Bleddyn Williams and although Dr Jack gave me a rollicking for delay my passes I can safely say that I learned more in one afternoon with them I had in my entire playing career up till then!” 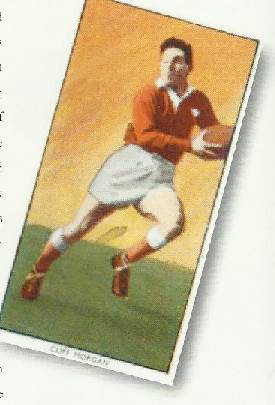 In those early Cardiff teams with Cliff Morgan were not just Jack and Bleddyn and Rex Willis but great club men like Peter Goodfellow and John Nelson who were loyal servants of the club.  Cliff retained a great warmth for them and many others. “John Nelson always seems to be in the right place at the right time and played some wonderful games for Cardiff. Peter Goodfellow was a typical unsung hero a dedicated forward and he stands out in my memory for all those fabulous things that rugby really is at its best. Then there were Malcolm Collins and Eddie Thomas, Alan Priday was safely personified safety personified and Colin Howe, well he was just what you might call a character.

And Cliff Morgan has no doubt at all as to who was Cardiff’s Greatest clubman, “Hubert Johnson was a player in the chairman and his name lives on in the clubhouse museum, but more than all of that Hubert had a style and a presence and a humility which is synonymous with the club itself. In other words, he was class.” 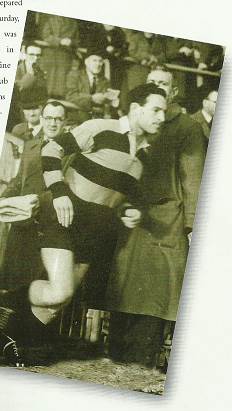 Cliff will talk about the virtues of others for hours without ever touching on his own contribution. Thus a game at Northampton is memorable because Bleddyn got two tries for Cardiff and Jeff Butterfield three the Saints and we lost, but I loved that game or little fly-half Roy Burnett was absolutely brilliant Newport and I remember feeling second rate”.

There was nothing second-rate about Cliff. He sees great qualities in his fellow human beings that himself he has in abundance. He was the greatest drawing card in rugby for nearly a decade and the Arms Park faithful saw more of him than any other crowd. A narrow miss against the Springboks in 1951 and then glory against the All Blacks and the Wallabies, all in partnership with Rex Willis, were only a part of his contribution to the club for he was always prepared to play every Wednesday and every Saturday near or far. When Willis was unavailable he delighted in partnering Brian Mark (“a fine player and another great Clubman”) and then Lloyd Williams who went on to be Cliff’s scrumhalf in his final seven internationals Wales.

At the very beginning of Cliff Morgan’s playing career his mentor at Tonyrefail Ned Gribble keeping the clearest device ‘Cardiff is the place you’. For that we will all be eternally grateful. But for now there is only one place Cliff Morgan the rugby player can be – the Cardiff Hall of Fame.