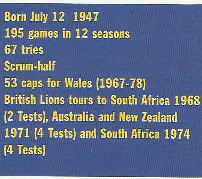 Gareth Owen Edwards may or may not be the greatest rugby player of all time but he certainly is the most charismatic. Just as Cliff Morgan captured the imaginations of the rugby world in the 1950s, so Gareth reached out beyond rugby in the television and video age to a wider audience and was undeniably one of the greatest advertisements the game has ever had. Not only did he transcend national boundaries with his army of admirers, but he also brought rugby union to the notice of those who hitherto had regarded it as a minority sport. And there was no substitute for seeing him ‘live’, for only then did we appreciate the sheer presence he brought to every game he played in. Running, kicking, passing and the cruel inevitability in his decisive try-scoring were all part of his armoury, but more than all of that, he was an inspiration to all who played with him and the ultimate challenge to those who played against him.

Educated first at Pontardawe Technical School and the Millfield and Cardiff Training College, he followed the traditional path of playing in Cardiff’s trials before appearing for Cardiff Athletic at Britton Ferry in September 1966, marked appropriately by two tries. His first team debut soon followed against Coventry and five months later after only six games for the Club he was playing for Wales in Paris. The rest, as they say, is history.

‘Men like Hubert Johnson and Lloyd Williams who were steeped in all-things Cardiff gave me a great welcome when I came to the club and I was very conscious of the traditions that needed to be upheld – and I was very keen to be part of it. I always remember some time later playing against the Co-Optimists at the Arms Park and one of their players noticed that the kit was laid out and our boots cleaned for us. He was absolutely amazed, but those were the standards and care that went with playing for the Club’ says a man who has seen it all around the world of rugby.

It was the Club that gave him his first experience of world-wide travel as he went on the famous tour of South Africa in 1967. ‘That was a trip I’ll never forget. I had just played my first two games for Wales at scrum-half but our team was so strong, particularly in the backs, that I was more than happy to get a couple of games at fullback! When you’ve got guys like Howard Norris, Lyn Baxter and the one and only John Hickey with you on tour there was never likely to be a shortage of what you might call ‘memorable’ moments off the field and on it I was privileged to be part of an incredible team performance against Eastern Province.’ 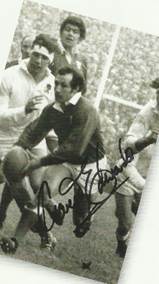 Five years later Gareth Edwards went on another Club tour to Rhodesia that was equally memorable. ‘This time we had Colin Howe as manager – need I say more?! Seriously, though, we were well coached by Dai Hayward and played superbly to beat the Rhodesian national team 24-6. It was a great advert for Cardiff Rugby.’

From which it can be concluded that, start of Wales, the Lions, the Barbarians and probably the planet or not, Gareth Edwards took his responsibility to the Club very seriously indeed. He is still proud of the fact that for all his fame and adulation he remained a one-club man and suggestions that he never played 20 games in a season were wide of the mark with 25 appearances tucked under his belt in 1972-73 and he always wanted the club to achieve success. ‘One of my biggest disappointments was not helping Cardiff to win the Welsh Cup. We were well beaten by Llanelli in 1973 and Newport pipped us in 1977 which, being our Centenary Season, was a bitter pill to swallow. Mind you, I was even more disappointed when the Club refused to pay a £50 ransom when I was kidnapped by Swansea student just before a game with Newport! Luckily I was released in time to play on the Saturday. I like to think that if Peter Thomas had been around he’d have paid up!’

Certainly Gareth Edwards was worth his weight in gold to Cardiff. The cup may have eluded him during his illustrious career but he was never far from famous matches. He partnered Barry John when he dropped four goals against Llanelli and he was also there when Gerald Davies conjured four tries at Pontypool Park. ‘Yes those were great days. I also remember us coming back from 6-28 down against the Barbarians to win 29-28 in the days when those games were very competitive and played in front of capacity crowds.’ 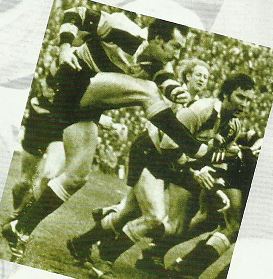 He loved playing on the Arms Park ground where he says, ‘the fans were pretty level-headed – they never got too excited but in the other hand they never got too despondent or unfairly critical on the occasional bad day for the team.’ Superstar or not, Gareth also valued the presence of great Club players. ‘Gerry Wallace made me laugh uncontrollably at times. Tony Williams was a wonderful encourager of young players, and men like Baxter and Carl Smith, Mervyn John and John Hickey, Gary Davies and Billy Thomas were the backbone of any successful side. Why some of them never played for Wales I will never know.’

I will always be indebted to Cardiff because the Club taught me a valuable lesson – to treat everyone as equals, just as they did themselves,’ concludes Gareth Edwards, and for him being elected to the Cardiff Hall of Fame means as much as all the other accolades he has received from sporting bodies wherever rugby is played.