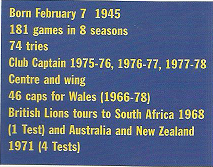 It takes a very special person to captain Cardiff Rugby Club for three successive seasons and in modern times Thomas Gerald Reames Davies was the player to do so. That his predecessor was E Gwyn Nicholls was entirely appropriate as the two of them will one day be part of the same pantheon of the game’s immortals. Equally fitting was the fact the Gerald’s term in office, as it were, included the Centenary Season of 1976 / 77, a landmark in the history of the Club and one that everyone realised would need to be celebrated in style as well as achievement. And no one has ever doubted that Gerald Davies had style in abundance.

His approach to captaincy is as typical of the clarity and vision that he brings to everything he is involved in. ‘Initially, I was elected for a one year term as captain, but whatever the future held I realised at the outset that I would have to approach the huge responsibility as if it were longer term. Club captaincy demands a three-year plan: a year of getting to know one another and establish a pattern, both on and off the field; a second year when the original plan begins to take shape; and then hopefully, a third when everything falls into place. I was fortunate to get the opportunity to carry on for the three years and, yes, by the end I really did think we were achieving something in the manner I had hoped’. 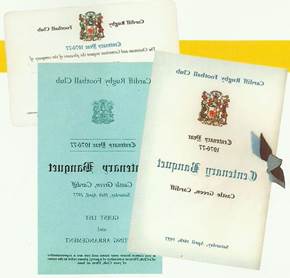 There was very little luck in what Gerald Davies achieved in those three years as, to a man, those who played under him swear he was the best captains they ever had. His positive qualities and ambitions came across in a gentle but firm way, perhaps typified by his half time talk in the coruscating cup match at Pontypool in 1978. ‘ We had been under the cosh for 40 minutes, ‘ recalls Gerald, ‘ and none of us had hardly touched the ball although I managed to sneak one try. So I simply said ‘Well done, we’ve held them, now when we do get the ball in the second half lets have the confidence to move it wide and test their defence’. What happened next in that second 40 minutes is now part of cup’s folklore as Gerald himself touched the ball three times and scored three more of his trademark tries.

Which brings us to Gerald Davies the player. The school-boy fly half, first capped at centre, who went on to become one of the greatest wings, many would say the greatest wing in the history of the game. ‘I had played with future Cardiff team-mates such as Maurice Richards, Keri Jones and Gary Samuel for the Secondary Schools but my first experience of senior rugby was with Llanelli and Loughborough Colleges, and it was whilst I was playing for the Colleges in Scotland that the seeds of my Cardiff future were sown’. Gerald was returning by train from a sevens tournament north of the border when, as he puts it, ‘still a penniless student’ he was taken under the wing of a generous Cardiff committee who gave him food if not shelter on the long journey home. ‘I liked the way they did things and was a little flattered by the interest they showed in me,. Early the following season Gerald Davies scored two tries on his debut for the Athletic XV at Bonymaen and a couple of holiday games for the First XV against Watsonians at Christmas and Harlequins at Easter further strengthened his Blue & Black links. 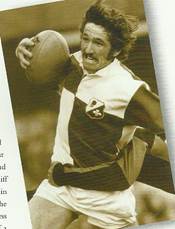 Thirty-six appearances in 1966-67 qualified Gerald Davies for his Cardiff cap in the same season that he played in all five games for Wales, culminating in two individual tries in ‘Jarrett’s match’ against England. ‘It was a magical season for me because I found myself playing in the c entre alongside my boyhood hero, D Ken Jones, a genius if ever there was one. And when Ken wasn’t playing there was Tony Williams who was so good at putting others into space’. Not the least of Gerald’s contribution to the Club was the honour he brought it playing for the Barbarians against both the Wallabies and the Springboks and then, with five others – Keri Jones, Maurice Richards, Barry John, Gareth Edwards and John O’Shea – touring South Africa with the Lions.

‘I had first gone to South Africa with the Club in 1967 and what a tour that was. Our performance against Eastern Province at Boet Erasmaus, when we scored six tries in a 34-9 win, was truly remarkable. Everything seemed to click and as a young back it was a joy to be part of it’.

Rugby had never formed all of Gerald Davies’ life or ambitions and early in the 1969-70 season he went to Cambridge University to study for a second degree and thereafter to the magnificent London Welsh side of the early 1970s. By the time he returned to Cardiff in the autumn of 1974 he had found further fame as a deadly finisher and all round footballer for both Wales and the victorious 1971 Lions in New Zealand. But his beat years at the Arms Park still lay ahead.

‘At the time that I assumed the Club captaincy in 1975, there was still a feeling that although the team was still winning matches, a certain flair and individual skill was missing. The crowds were beginning to dwindle so the challenge facing all of us was to return the Club to its former glory. I would like to think that by 1978 we had done that’.

All who saw Cardiff play rugby at the time would agree that they did indeed regain their style and elan and that their captain set the greatest of examples. For that, all concerned with the good name of Cardiff Rugby Club owe Gerald Davies a huge debt.