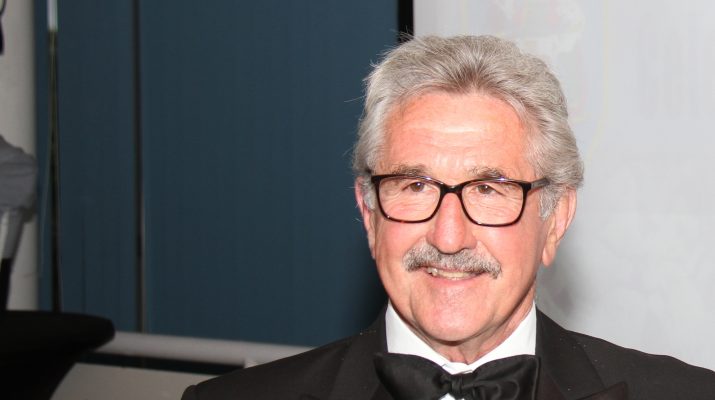 It was announced last Monday that former Cardiff great Gerald Davies will be the next President of the Welsh Rugby Union, taking up his position at the close of the Annual General Meeting on 17th November. When he takes up his new role Gerald will be replacing another man who was popular with Arms Park regulars in Dennis Gethin, who will have served 12 years upon his retirement from the position. Our congratulations and best wishes are extended to Gerald on his appointment.

Another former Cardiff  player, WRU Chairman Gareth Davies, said, “It’s a great privilege to be able to welcome Gerald Davies as the next President of the WRU and we look forward to him officially taking up the position in November.”

Making his debut for the Blue and Blacks in 1965 (in the traditional Christmas game against Scottish side Watsonians) Gerald Davies played 62 times for the club before spending four years in London playing for London Welsh. A second spell at the Arms Park saw Gerald play another 105 games for the club – 167 games in total during which he scored 73 tries. During his second spell at the Arms Park, Gerald captained the club for three seasons, including the season to celebrate the club’s centenary in 1976-7.

His international debut came in 1966 against Australia, the first of 46 caps during which he scored 23 tries. Selection for the Lions followed and he played on the 1968 (South Africa) and 1971 (New Zealand) tours – including 5 test appearances, he also played 10 games for the Barbarians scoring eight tries.

In 1999 Gerald Davies was inducted into the Cardiff RFC Hall of Fame.

In an interview, concerning his appointment Gerald said,
“It’s a wonderful honour to have been asked to represent our national game as President and I would like to thank all of the member clubs throughout Wales for giving me the opportunity to serve Welsh rugby. Welsh rugby has a great history and tradition and I’m delighted to follow in the footsteps of some truly exceptional rugby men who have held the position through time.

“It has been my greatest honour to have played international rugby for Wales, but it really is the pinnacle of my lifetime in rugby to receive this honour at such a wonderful time for our national sport.

“We are making magnificent progress not just on the pitch but also our progressive union is doing great things off it, and I’m particularly delighted to hear the news about Liza Burgess joining the Council and increasing female representation within our governance.”